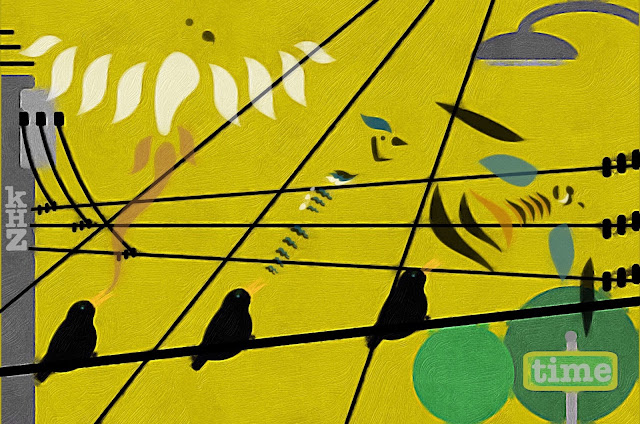 This is a re-work of a picture I did in 2014.  I liked the original concept I had of merging a sonogram with starlings calling from utility lines, but I was never satisfied with how I executed it.

The scenery of the picture is the sonogram graph.  I wanted to highlight the starling's ability to imitate other birds, so the data points of the sonogram are shown as abstractions of birds I've heard starlings imitate.

Sonograms aren't usually depicted in field guides.   But the Golden Guide "Birds of North America" does include sonograms for many birds.  When I first started birding I found these sonograms to be more helpful in describing bird calls than the textual descriptions offered in most field guides.  I could glean a sense of a call's timing, pitch range and variation from the sonogram's blotchy plots and roughly compare this to what I heard in the field.  This though, was before recordings of bird songs were readily available online or mobile devices (cause they didn't exist!).

From the 2014 post
Don't take this as a defense of starlings; I do understand their negative impact on other cavity nesting birds (but really, who's to blame for this), but I enjoy watching starlings.  I especially enjoy listening to them for other bird sounds that they are imitating.  I frequently see them in my neighborhood on the mess of utility lines that run through the alleys and along the streets.  I envisioned these lines as the lines on a sonogram graph, with the starling's call taking the shape of the bird they are imitating; the blips on the sonogram.