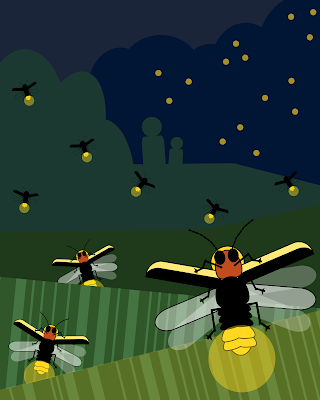 Firefly, lightning bug and glow-worm are three names that all refer to the same thing, sort of.  They are all commonly used names for a group of bioluminescent beetles in the the family Lampyridae.  Bioluminescence is the ability of some animals to create light from compounds produced within their bodies.  More specifically, firefly and lightning bug refer to the adult beetles while glow-worm refers to the larva.

Firefly and lightening bug refer to the adult stage of lampyrids, but they are actually not flies or bugs, they are beetles.  And the use of the words fire and lightning is a bit ironic since the light that lampyrids create is "cold".  All of the energy used (in the form of ATP) produces light with none lost as heat, a feat we have been unable to achieve with light bulbs so far.  The name glow-worm refers to the larval stage.  Of course they aren't actually worms at all, and to my eye are one of the least worm-like larva I've seen, instead resembling some sort of miniaturized ankylosaur.  But hey, it should really come as no surprise that commonly applied names don't stand up to taxonomic scrutiny, and something more descriptive like cold light beetle doesn't have the same ring.

There are about 170 species of fireflies in North America.  Minnesota has about a dozen species; there's no comprehensive list that I could find, and though fireflies as a group are easy to recognize, identification to species isn't always easy.

A few generalities that can be made about fireflies:
But like so many groups of organisms, there are just as many differences and variations, including: 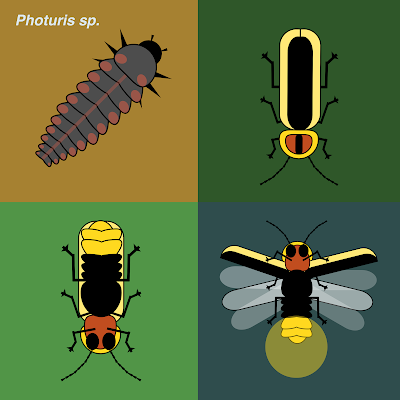 There's more to know and other interesting adaptations (like reflex bleeding) that I could write about, but I think I'll refer you to some excellent online resources.

The picture I used in the middle of this post is from an article entitled "Studies on the Flash Communication System in Photinus Fireflies" by James E. Lloyd" published by the University of Michigan Museum of Zoology, Miscellaneous Publication No. 130, 1966
Posted by 11 at 5:25 PM