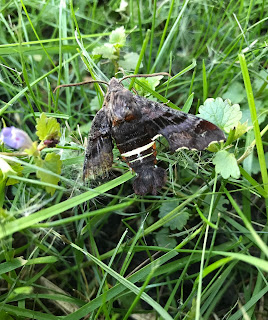 In the Sphinx Moth family, Sphingidae.  It's been in our backyard for a few days; its wings are pretty beat up so its usually in the grass struggling to fly.  We've been putting it on Virginia Waterleaf that grows abundantly in our yard and is in full bloom right now.  But the next time I see it, I'm going to put it on a grapevine, which is what the larva feed on. 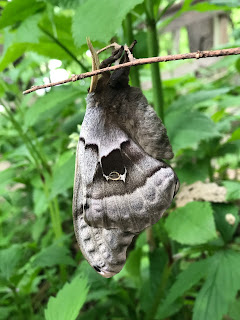 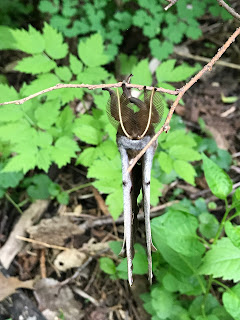 Giant Silkworm and Royal Moth family, Saturniidae.  Thank you Debbie for showing me this moth and not thinking it was a big leaf.

Both moths happen to feature a character from Greek mythology in their names.  Nessus was a centaur whose trickery led to the death of Heracles.  Polyphemus was a cyclops from the Odyssey.  There's a tradition of naming moths the larger North American Silkworm moths after figures from Greek mythology.  A few sphinx moths have myth inspired name, but not consistently so.  If anything, many N. American sphinx moths are named after their caterpillar's host plant.