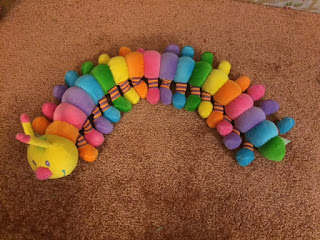 This stuffed animal has crossed my path twice in recent weeks.  I believe it's supposed to be a caterpillar.  But actually it's a centipede.  A really colorful, fluffy centipede.  Look past the exaggerated cartoon features and it is without a doubt a centipede; a many segmented animal with one pair of legs per segment.  But how many kids want a cuddly centipede?  Probably not many.  I'm pretty sure the intention was to make a caterpillar so why wasn't a bit more attention placed on the arrangement of legs so it looks more like a caterpillar?

I'm fine with animals being depicted unrealistically, abstracted, or with  anthropomorphic features.  But there's a fine line for me between creative license and dumb, uninformed design choices.  Admittedly this line of mine is vague and idiosyncratic, but I think it boils down to to something simple and consistent: do the deviations from reality made in depicting or crafting an animal somehow support or enhance the purpose of that particular depiction.  For example, an animal speaking in a story might advance the plot or make for a more interesting character.

Let's see how this works out practice, using the stuffed animal pictured above as an example.  I'll go through each feature and explain why I'm ok with all the cartoon, anthropomorphic features of this toy, but that the leg arrangement clearly means it's a centipede.

So far all these features, though not realistic, are ok with me because they enhance the the appeal of the toy. 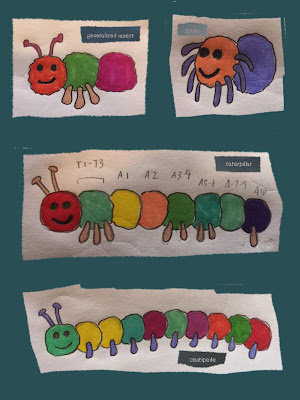