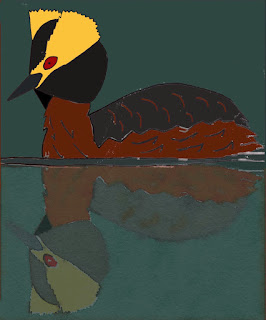 Horned Grebe, Podiceps nigricollis.  Grebe.  Say it out loud.  It's a strange word.  Try saying "grebe" with an Igor sort of voice, or do your best Ren imitation and try saying it.

What is a grebe?  Where did the word come from?  I wanted to find out its origin.  But after a little research, it seems know one quit knows what the word means, or where it came from.  Various sources gave a vague reference to the word "grebe" having a French origin and perhaps meaning "comb".  I consulted a number of older books and articles on birds, when authors were much more verbose in their bird descriptions, hoping to find a better explanation for the name, but no luck (though I did come across this interesting article from 1919 issue of the Auk about bird popular names which also mentions grebes).

Other names for the Horned Grebe include Hell-diver, Water-witch, Devil-diver, Pink-eyed Diver, and Dipper.  Which all sound pretty cool.  Some could even be super villain names ("Holy Hell-diver Batman!" "Right Grebe-boy"). 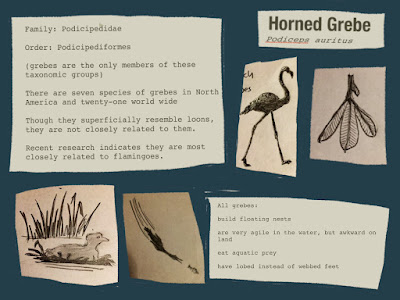