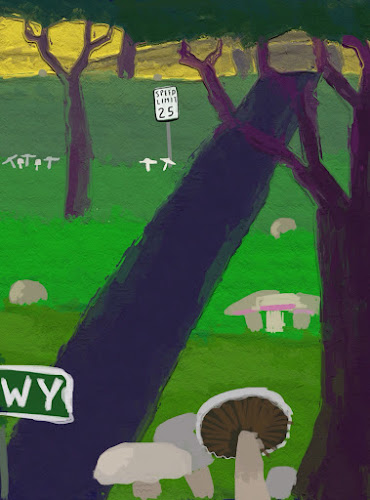 I dropped my oldest daughter off for her first day of school at Brightwater Montessori in North Minneapolis, then I set off to work. I usually take Victory Memorial Parkway south from there. It's slow, but it's pleasant, and there's never any traffic, unlike other available routes. And I often get a glimpse of some interesting natural phenomena. Today the green of the parkway was spotted with various mushroom whites and browns. There were numerous fairy rings of Green-spored Lepiotas, Chlorophyllum molybdites, and a few rings of Agaricus mushrooms, Agaricus sp. Also present were a smaller number of Purple-spored Puffballs, Calvatia cyanthiformis.