Bees vs. Wasps vs. Yellowjackets "Ouch, a bee just stung me!" But are you sure it was a bee? More than likely it was a yellowjacket or a wasp, not a bee. You're response might be something along the lines of "Who cares, what's the difference, it stung me!"

I think the difference does matter. Although bees, wasps, and yellowjackets are related and superficially similar, their ecology is different and their propensity and "reasons" for stinging are different. And I think there is value in knowing your neighbors, even the ones with six legs, four wings, and stingers.

Note that there are many, many, many (times many) more types of bees and wasps, but they are some combination of small, solitary, not aggressive, not yellow and black, or rare and thus not encountered or noticed by most of us.

Now for some brief, very non-technical descriptions. As I researched for this post I realized that it was difficult to make clear-cut distinctions between the various insects known as "bees". I hope that I haven't over simplified anything here, but still provide clearer idea of the "bees" found in Minnesota.

Slightly fuzzy insects with golden yellow and brown stripes. They collect pollen and nectar from flowers, make honey, and construct hives of wax (honey comb) in cavities such as tree holes, or more commonly in hive boxes when kept by people. Hives can contain many thousands of individuals. The whole hive overwinters and resumes activity in the spring. They are not aggressive. Unless you mess with their hive too much.

In my experience, people are confused about what a honeybee actually is. They are not the bright yellow and black insects that harass you at picnics; those are yellowjackets. Unless someone keeps honeybee hives in your neighborhood you are unlikely to encounter a honeybee, they are fairly rare in the wild these days. And they are not native to North America, which surprises many people.

Fuzzy insects with yellow, black, and sometimes orange markings. There are about 20 species in MN. They collect pollen and nectar from flowers, and make very, very small amounts of honey. Most species construct small nest underground and make small amounts of wax. Nests contain up to a few hundred individuals. Only queens raised at the end of the summer overwinter. These queens start new nests in the spring. They are not aggressive, but are capable of stinging (like if you try to hold one in your hand). 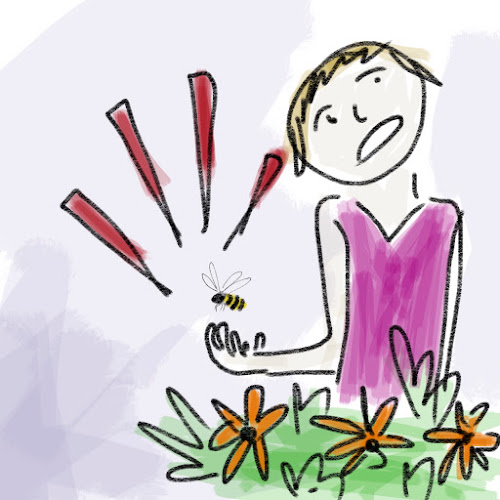 Honeybees and Bumblebees are both in the family Apidae. The next three groups are all in the Vespidae.

Not fuzzy, generally yellow and black. There are about 14 species in Minnesota. They hunt other arthropods to feed their larva, while the adults feed mostly on sugary foods such as over ripe fruit. The usually construct papery nests underground. Nest of some could contain a few thousand individuals. They tend to be aggressive, even when away from their nest, and especially so late in the summer and early fall. Only queens raised at the end of the summer overwinter to start new colonies in the spring.

Species of Vespula are the "bees" that most people have unpleasant encounters with. They are not bees, they are in a separate family, the Vespidae and play a very different role ecologically. I think most people if asked to form a mental image or draw a picture of a bee would produce something that very much resembles a species of Vespula. I think this point is important as most people believe it is bees that harass them at picnic, when it is likely to be yellowjackets.

Along with being called bees, yellowjackets are also known as ground bees, and as hornets. Taxonomically, North America has no native species of hornets, which are in the genus Vespa. 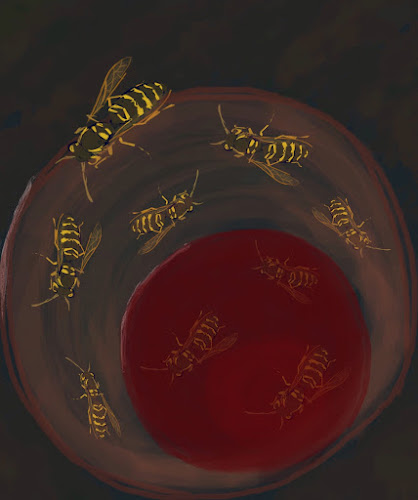 Not fuzzy, black with yellow or ivory markings. Probably four species in Minnesota. They hunt other arthropods and consume sugary foods. They usually construct enclosed, papery nest above ground, sometimes high up in a tree. Nests of some could contain up to a few thousand individuals. They can be aggressive, but aren't generally encountered as often as species of Vespula. Only queens raised at the end of the summer overwinter to start new colonies in the spring.

The papery, aerial nests of Dolichovespula species are often called "bee" nests or hives, which is incorrect. And note that the black and ivory insect known as a Bald-faced Hornet, D. maculata is not, taxonomically, a hornet. 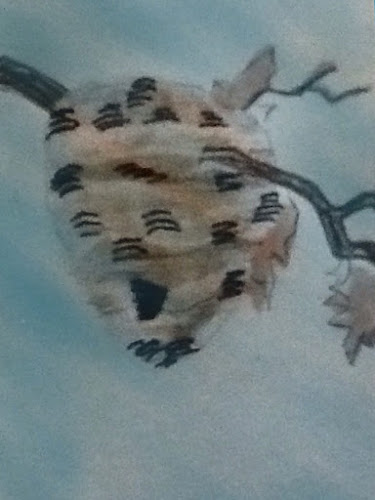 Not fuzzy, some combination of yellow, brown or black and orange with a noticeably skinny "waist". I'm uncertain how many species are found in MN. They hunt other arthropods, especially caterpillars. Like the previous two wasp groups, the adults feed on sugary foods, but are much more likely to visit flowers for nectar. They build open paper nests in protected areas, with some species often on man-made structures. Nest can contain up to a few hundred individuals. They can be aggressive, mostly near their nest. Only queens raised at the end of the summer over-winter to start new colonies in the spring.

I made the chart at the top of the post to try and pictorially show similarities and differences between the five genera commonly called "bees" in Minnesota. I could have added more traits, or not included some; what got included was mostly an aesthetic choice. The main comparison I wanted to make was how the usual common names don't correspond well to actual species.

I primarily used the following sources for this post:

The BugGuide pages on the Hymenoptera