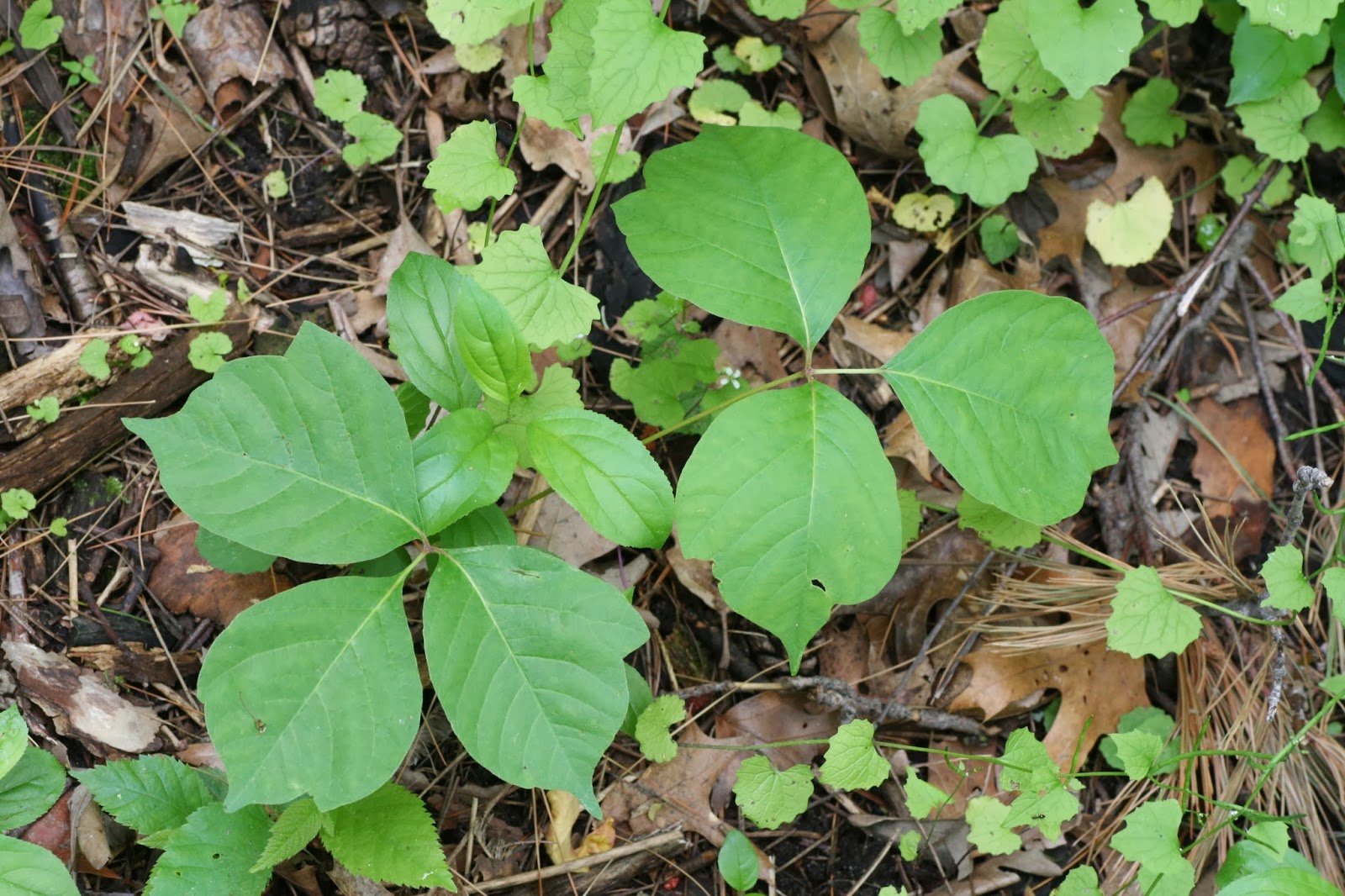 As a professional naturalist, if I had to pick one most frequently asked "nature" question it would be how to identify Poison Ivy.  So of course, I point out the three leaves per stem (leaves of three, let it be), which works . . . to a point.

Because as soon as you start really looking, a lot of plants have three leaves and sort of look like poison ivy, and poison ivy itself is variable enough that it can be hard to pin point other identifing features that seperate it from these look alikes.  So I've been thinking for awhile of a quick, nontechnical guide to separate Poison Ivy's look a likes from the plant itself.

The plants pictured below are prime candidates for Poison Ivy look alike status.  Under the plant's name is a one word or short phrase description of the plant; one feature that distinguishes these three-leaved plants from Poison Ivy.  Then after the picture is a short discussion of that feature.  Note these are not complete ID guides for these plants. 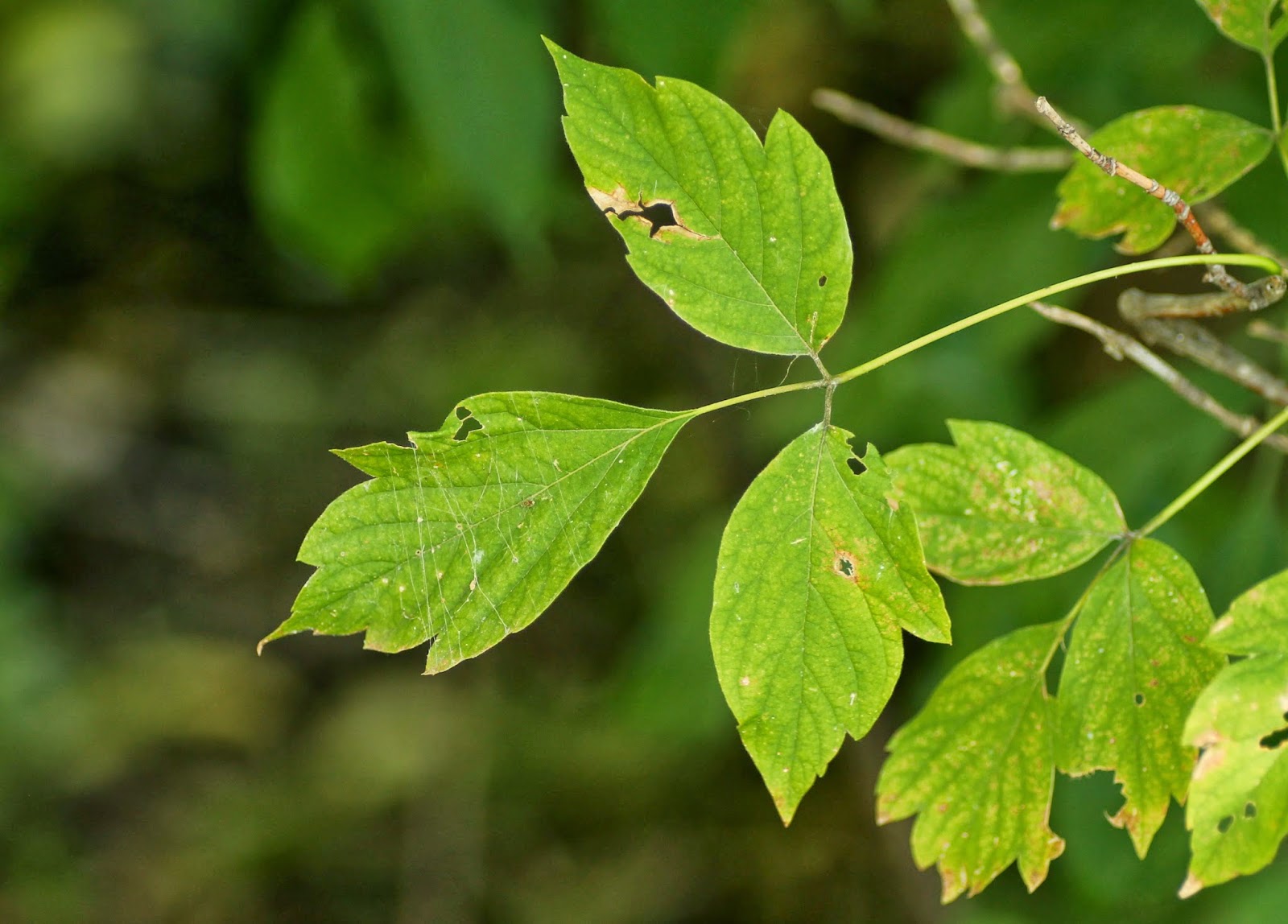 When Box Elders first sprout, they look remarkably like Poison Ivy.  As the they grow, it assumes a more definitive shrub-like appearance and is less likely to be confused for Poison Ivy.  A quick, but not nescessarily easy way to tell a young Box Elder apart from a Poison Ivy plant is to note the arrangement of the leaves; they are opposite in Box Elders or side by side along the stem.  I say not easy because sometimes stems and leaves break off making an opposite arrangement of leaves look like an alternate arrangement  (which Poison Ivy has), and the arrangement isn't always the clearest in smaller and young plants.  Overall, it's hard to find an easy feature that definitively separates the two, though in my opinion, if you let go of the more analytical, detail oriented aspect of your brain, you'll notice Box Elder always has a certain shrubby je ne sais quoi to it. 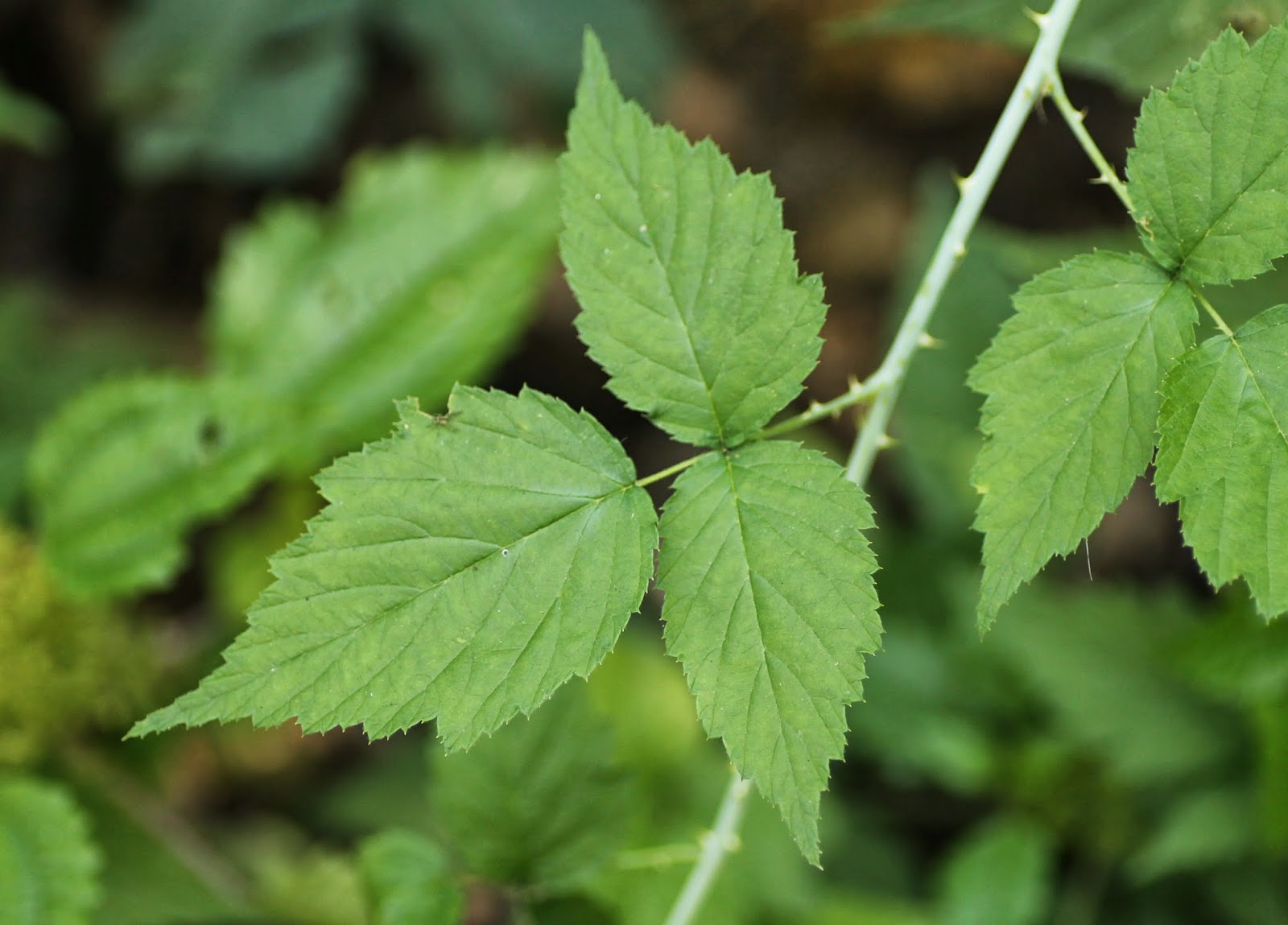 Fairly easy to distinguish from Poison Ivy once you notice the thorns. 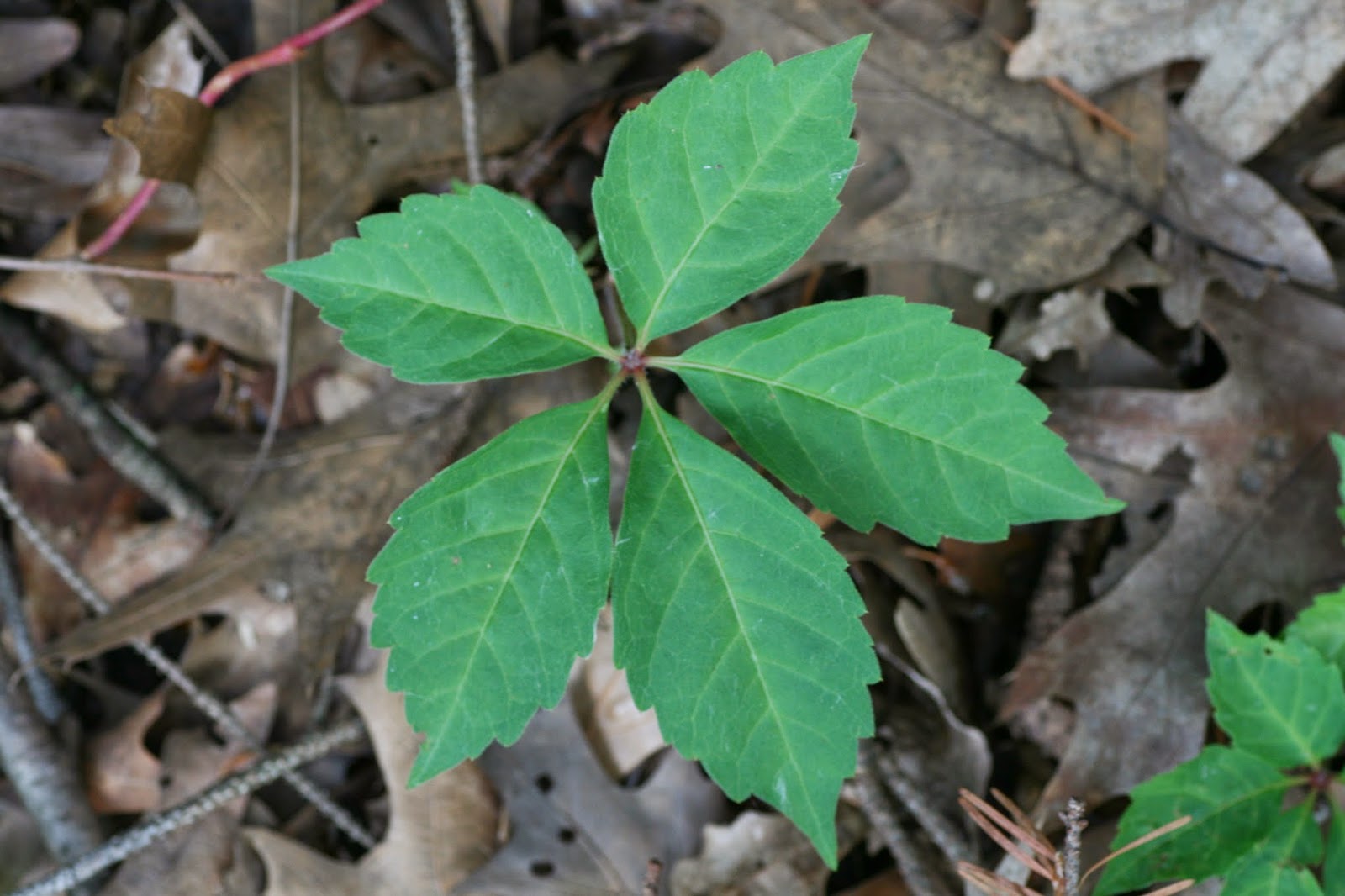 Despite the five leaves instead of three, Virginia Creeper does resemble Poison Ivy.  They are both found in similar habitats.  They both have similar growth forms; they can both assume either a ground cover habit or grow as a climbing vine.  And they both often turn a bright red in the fall. 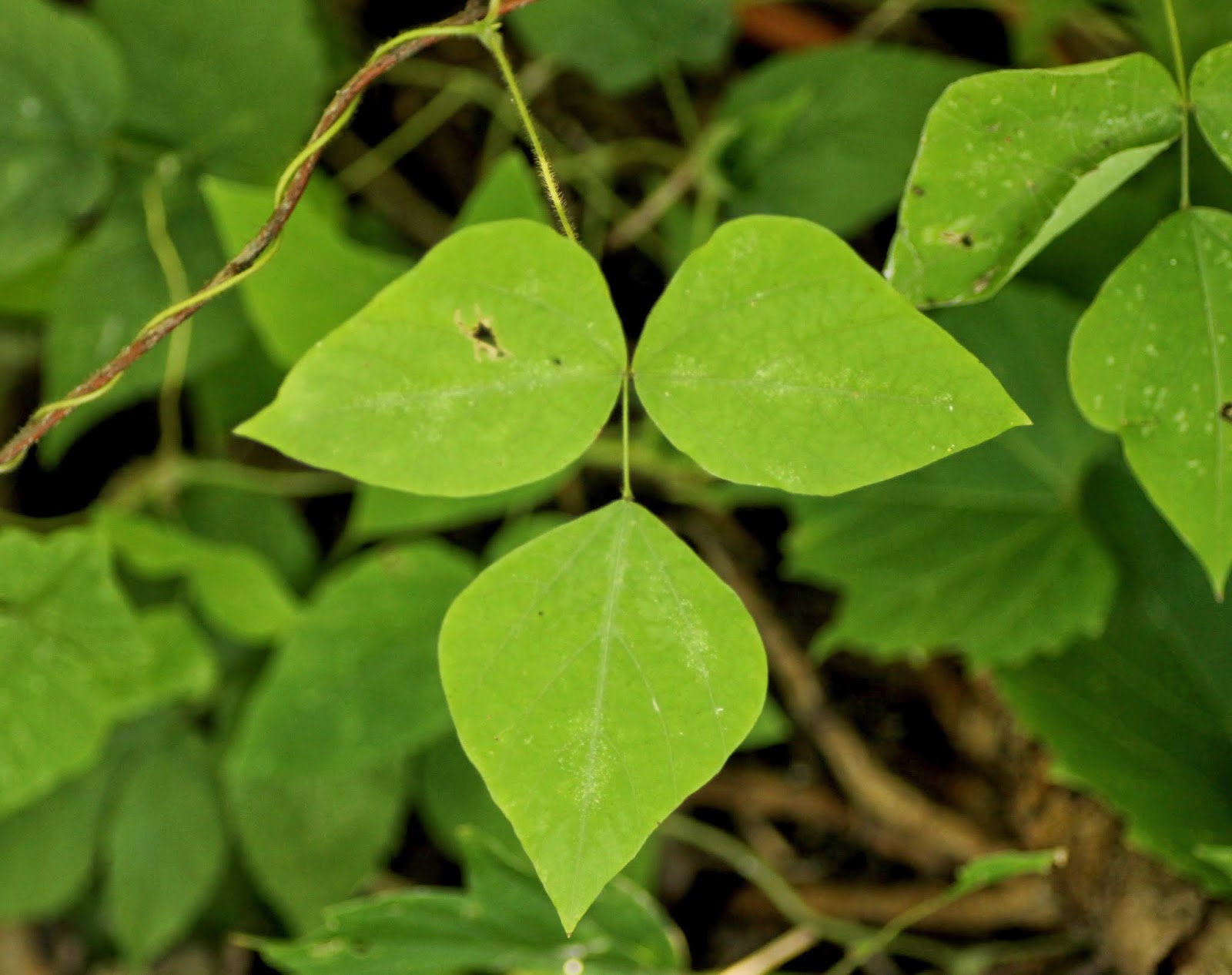 No teeth, bumps or serrations along the leaf edges separate this plant from Poison Ivy.  It spreads out along the ground in the woods, sometimes climbing up other plants.  In my opinion it has a much more dainty appearance compared to Poison Ivy. 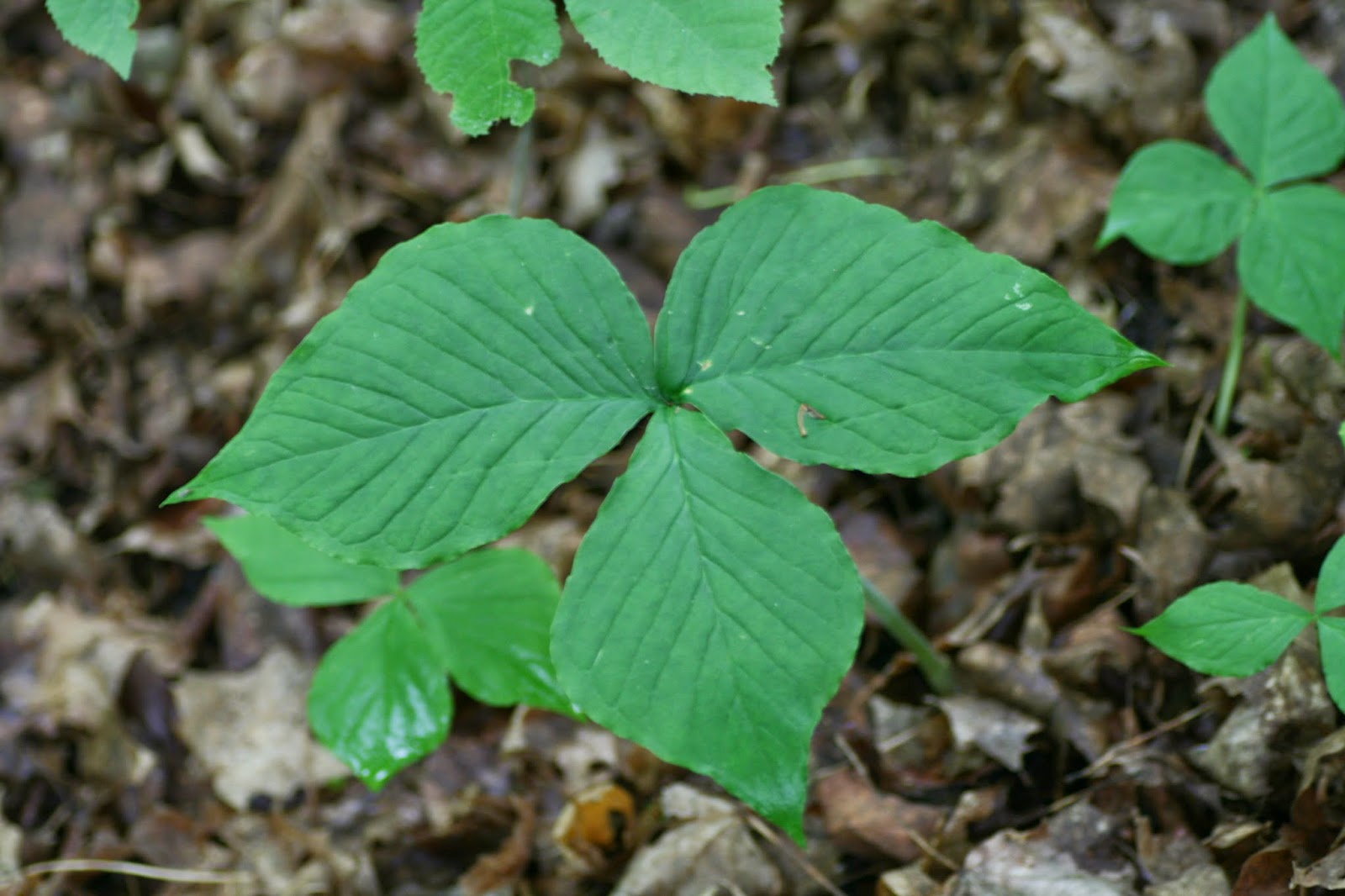 The three leaves are joined together in the middle, with no stems.  Trilliums (Trillium spp) also have three leaves and strongly resemble Jack-in-the-Pulpits, if no flowers are present.  It doesn't seem to get confused with Poison Ivy all that often in my experience, maybe because it is a spring ephemeral that comes and goes before Poison Ivy is in full swing.

Note: the five plants included here may not be definitive, since most of my experience with the plant is from MN.  I'm curious to know what other plants you know of that look like Poison Ivy.