Ugh . . . we're experiencing some very cold temperatures here in Minnesota, with highs in the negative digit range, plus wind chills of course.  Not ideal conditions for poking around under logs looking for dried up turkey tail fungi, or admiring the variety of white spots on tree bark.

But I truley enjoy Minnesota's varied and often unpredictable climate, and anyway, I'm a "the glass is half frozen" type of person, and like to find opportunities in most situations.

So with the cold temperatures, it's not uncommon to have ice floating around in the atmosphere which can refract and reflect light from the sun and moon and create some interesting and beautiful halos. 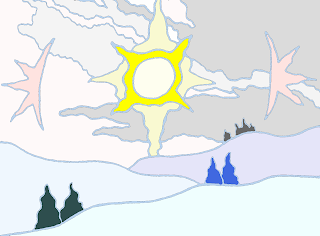 Sun dogs, parhelia, or mock suns are two arcs of light to either side of the sun.  They are usually about 22° away from the sun, which is about the same as the width of your hand outstretched to arm's length (your hand and fingers make really useful measuring tools for things in the sky).  They are most often seen when the sun is low in the sky at sunrise and sunset.  Often times the sun dogs have a red tinge on their sun side.

The same effect can be seen with the moon, and are called moon dogs, or parselenae. 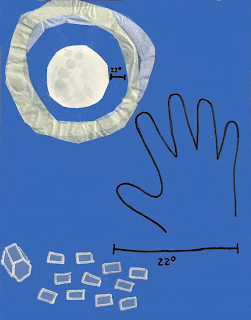 This is a complete ring of light surrounding the sun or the moon.  The ring is big, with a radius of 22° - which means that sun dogs are found along the same circle.  A 22° circular halo is formed when there are poorly aligned ice crystals with a hexagonal prism shape in the atmosphere.  And like sun dogs, it doesn't have to be cold on the ground for a 22° circular halo to form, just ice crystals in the atmosphere. 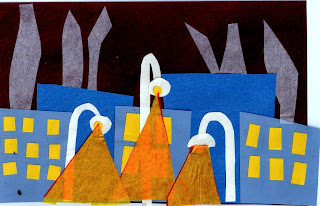 Light pillars are different from the previous two halos for three reasons: First, the light source is street lights.  Second the ice crystals have to be close to the ground (sun dogs and 22° halos can be formed by "diamond dust" ice particles low in the atmosphere, but are most commonly caused by ice high in the atmosphere).   And third, it does have to be cold on the ground.

Light pillars are caused when light from street lights (wastefully) goes up into the sky and is reflected back down by horizontally oriented hexagonal plate ice crystals.  The pillars are not physically over a light source, as might be expected.  But then again, none of the optical effects described here actually exist anywhere in physical space - "like all halos they are purely the collected light beams from all the millions of crystals which just happen to be reflecting light towards your eyes or camera" (quote taken from the Atmospheric Optics page on light pillars).

There are plenty of other halos that can form, mostly dependent on the shape and orientation of ice crystals floating about.  For a more complete list and detailed information about each, please consult the aforementioned Atmospheric Optics website, the definitive website for information about ice halos, rainbows, and more.