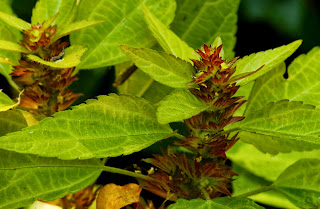 Three-seeded Mercury, Acalypha rhomboidea is a relatively common plant generally found where soil has been disturbed.  I have it growing in my yard in some of the less tended corners.  It's generally considered a weed, which are typically undesirable, but it is also a native plant, and native plants are usually considered desirable.  So which is it? 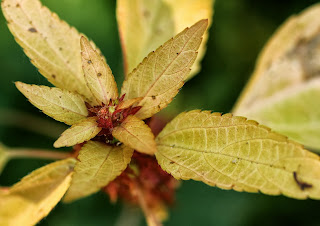 I look at it this way - weed status is a state of mind, there's no hard and fast definition of what makes a plant a weed; a weed is a plant growing someplace where someone doesn't want it.  When a plant is called "native" it's a bit more objective, based on historical records of one sort or another, that the plant has been present in the area for quite some time (usually if the plant was here when Europeans arrived and described it, it's considered native).

So it's not a weed in our yard, it's part of the garden.  It does require some, um, weeding, since it does produce quite a few seeds and spreads, but what else would I do with myself if all the plants in our garden grew where we thought they should?

Since it is a native, it's probably used by some wildlife.  There are some references to the seeds being eaten by certain birds, and more than likely insects of some sort or another use it, though the plants growing in our yard appear mostly untouched. 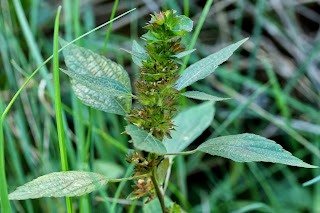 In my opinion, the plant doesn't really live up to its name.  The name Three-seeded Mercury has a dramatic or mysterious sound to it, one that seems indicate some sort of place in human history, but it seems to be, well, just a weed.  The term "mercury" has numerous associations, but none seem to quite match the plant.  There is a related genus of plants, Mercurialis, that has some relevance to people, with one species being poisonous, and another with homeopathic properties.  But I still have to wonder about the overall relationship of this plant to any of the many meanings, associations and uses of the word "mercury".  Lost in time perhaps 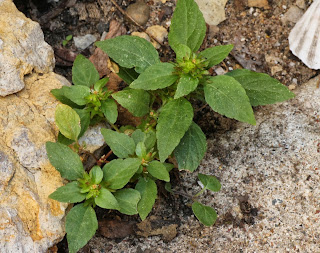