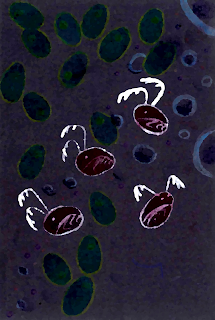 Water Fleas aren't fleas at all, or even insects.  They are crustaceans in the Cladocera order, Daphniidae family, also commonly called daphnia.  There are about 150 species in North America.

Some interesting facts about water fleas:

They reproduce parthenogenetically, that is without mating, and generally, most populations are made up females.