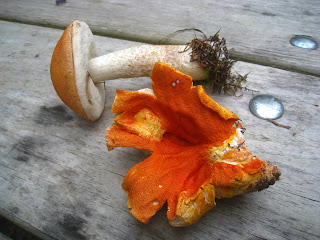 Last week while camping at Jay Cooke State Park I had high hopes of finding lots of Lobster mushrooms and boletes.   But there were few to find.  But I did find one good sized Lobster and one nice Scaber Stalk (Leccinum sp) that got cooked up into a pretty tasty dish. 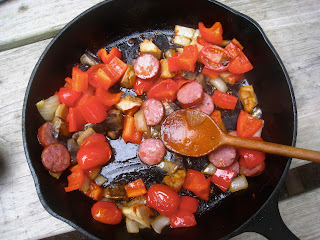 We threw together what we had: tomatoes, red peppers, onions, and bratwurst, and cooked them them up with the mushrooms in butter in an iron skillet over the fire.  The Lobster mushroom added a nice crunch, while the Scaber Stalk was very soft.  It might not have been the most obvious combination of ingredients, but it worked out well, especially for a campfire dinner. 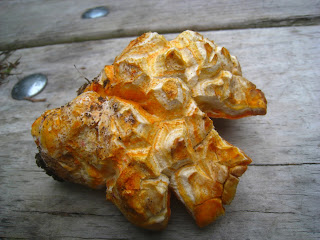 Lobster mushrooms are actually species of Russula or Lactarius that have been parasitized by the fungus Hypomyces lactifuorum.  The bright orange color is the H. lactifuorum fungus covering the mushroom.  It also causes the mushroom to grow in a very twisted and lumpy fashion.  It also makes the mushroom very tasty and gives it an unusually crunchy texture.  Some species of Russula and Lactarius are poisonous, but either the H. lactifuorum neutralizes the toxins, or it only infects non-poisonous species. 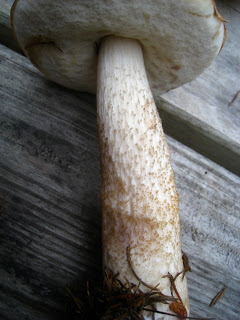 As I mentioned, the bolete was a species Leccinum, or Scaber Stalk.  It's a fairly "easy" bolete genus to recognize as they usually have scabers on the stalks; little bits of the stem that stick out, often colored differently than the stem itself.  However, other bolete genera may feature stem ornamentation that on paper differs from scabers, but in the field is more difficult to identify, especially to a someone new to mushrooms (such as glandular dots found in the genus Suillus and reticulation found in a number of bolete genera, most famously on Boletus edulis).

While a fairly easy genus to recognize, it can difficult to identify a Leccinum to species.  It matches fairly well the description given to L. aurantiacum, the Red-capped Scaber Stalk, in the "National Audubon Society Field Guide to North American Mushrooms.  A few identification details, besides size, shape and color that may aid in identification:


From an edibility stand point, you don't have to know the species if you know it's a Scaber Stalk, all are apparently edible.  But know your scabers vs. glandular dots vs reticulation, though overall boletes are a pretty safe group, but of course, there are always exceptions. 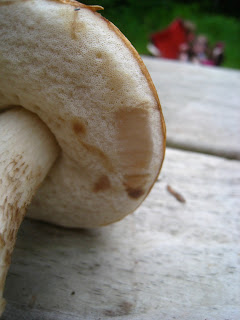 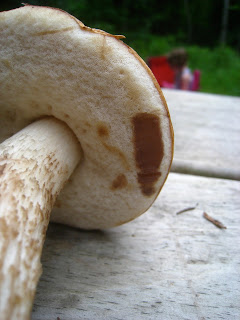 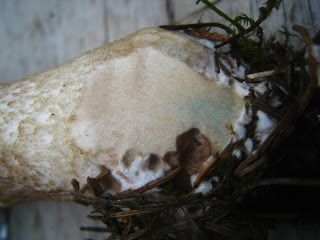