Is this a Pearl Crescent or a Northern Crescent? 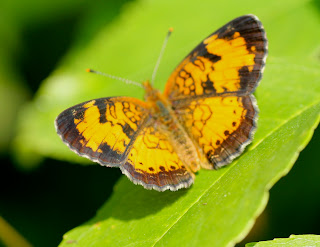 I spent the morning of July 4th with my parents hiking the Fish Lake Trails, part of the U of MN's Cedar Creek Ecosystem Science Reserve.  I highly recommend a hike there.  We especially enjoyed watching the baby tree swallows, and Red-headed Woodpeckers were seen on multiple occasions.

The orange and black butterfly pictured above was very cooperative.  It's one of two species of Crescents, genus Phyciodes; either the Pearly Crescent, P. tharos or the Northern Crescent P. selenis.  Up until about 25 years ago they were considered one species.  After reading through a number of descriptions, it seems the range is the best way to distinguish between the two species.  However, the Fish Lake Trails are located were the two species overlap.  The Pearly Crescent seems more likely, but only because it is mentioned on the Cedar Creek website, while the Northern Crescent is not. 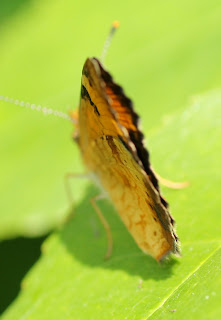 A field mark mentioned in most descriptions of these two butterflies concerns markings on the underside of the wings, specifically, the outer margin of the hind wing, which in the picture above, is the edge of the wing closest to the lower right side of the photo.  Pearly Crescents have a pearl-colored crescent in the darker smudge of this area of the wing, while Northern Crescents do not.  Well, Pearl Crescent are more likely to have this marking and it depends on whether the butterfly in question is a male or female.

One thing I've learned from reading about these butterflies is that a good picture of the underside of the wing is just as important as the upper side, and while maybe not as brightly colored, still quite pleasing to the eye.

(And by the way, there is third species, the Tawny Crescent, P. batesii, that is also very similar looking, but it's range is more northerly).

I used a lot of sources of information for this post, but my favorite one, and one that was new to me is the Wisconsin Butterflies site.
Posted by 11 at 9:29 AM