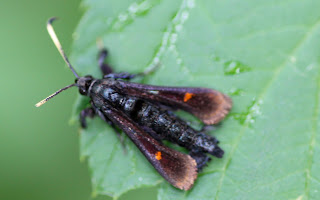 This insect stumped me (and others who saw it) for awhile.  Is some kind of fly?  Maybe a wasp?  Something else?  It was hard to see how many wings it had, which would have helped clarify things.  I went with a species of moth, and after some searching through images at the Moth Photographer's Group website, and much somewhat informed guesswork I arrived at an identification.  It is a Virginia Creeper Clearwing Moth, Albuna fraxini.

It is a member of the micromoth family, Sesiidae.  Micromoths are just what the name implies, small moths.  It's not a taxonomic grouping, just a descriptive term.  About half of North America's twelve   thousand or so known species of moths are micromoths, which means a good proportion of our moth biodiversity is easily overlooked and mostly poorly understood.  Their small size and sometimes unmoth-like appearance also makes many of them hard to even recognize as moths.  And because they are small and easily overlooked, they are probably more species to be discovered.

Sesiidae are one of the moth families commonly known as Clearwing Moths, because the wings scales are mostly absent, leaving the wings transparent.  Many of them are brightly colored or boldly patterned and probably mimic wasps.  The larva burrow into plant tissue to feed, in the case of A. fraxini, the roots of Virginia Creeper, Parthenocissus quinquefolia.

And if you're so inclined, here's a link to the Sesiidae gallery at the Moth Photographer's Group website.  Or better yet, keep an eye out for Clearwing Moths in your neighborhood.  You don't even have to stay up late since many of them fly by day.
Posted by 11 at 5:48 AM