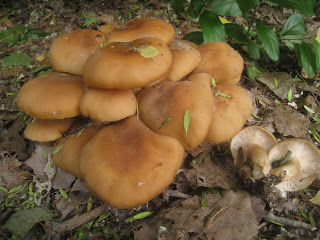 "Distinctive" features: growth in dense clusters, habitat of disturbed ground, white spore print.  I think it's one I'd like to try at some point, but only after further study. 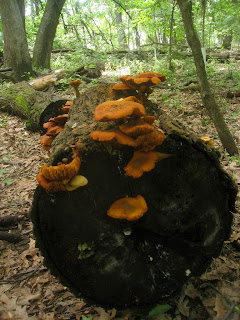 Bright rusty-orange spore print.  At first I thought they were a species of Pholiota because the caps were somewhat scaly.  But the spore print made me change my mind, and scales are mentioned in most descriptions, these just featured them more prominently than I'm used to with this mushroom

This particular patch was also much oranger than I've usually seen, maybe because of all the heavy rain we've had.  But notice the smaller, yellow mushroom growing on the top, left face of the log.  It has the appearance of G. junonius growing under dryer conditions.  It was smaller than most of the rest of the group, and the veil was still covering the gills, so it probably sprouted a few days later.  Or could it be another species.

A long with being an impressive mushroom visually, G. junonius often has a very distinct almond extract smell.  This patch was particularly fragrant. 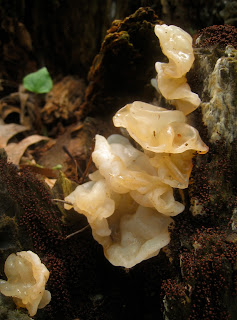