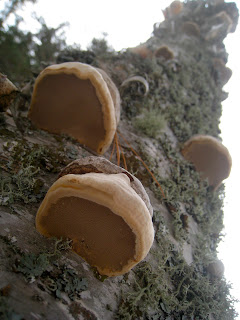 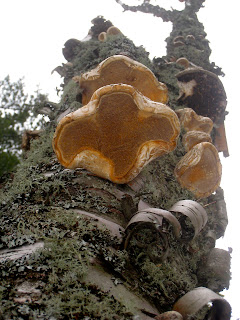 Both pictures are looking up the trunks of Birch Trees,  Betula papyrifera. Pictured on the left are Birch Polypores, Piptoporus betulinus, on the right are Tinder Conks, Fomes fomentarius.  Along the North Shore of Lake Superior these conks seem to be everywhere there are Birch Trees. 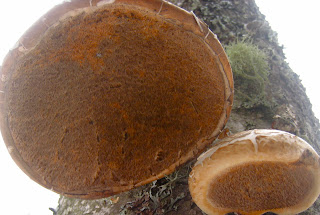 Both mushrooms have had quite a few uses through out history.  Possibly most famously, both were carried by Otzi the Iceman, the neolithic man found preserved, clothing and possessions included, in the Otzal Alps in Italy.  It is speculated that the Birch Polypore was used medicinally, while the Tinder Conk was used to keep an ember smoldering.  (Reading about all the equipment he carried in the link above is fascinating. 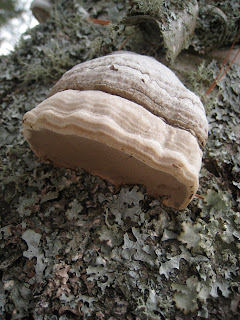 Actually both mushrooms have variety of medicinal properties, and both can be used as fire starting aids.  A few other notable uses: 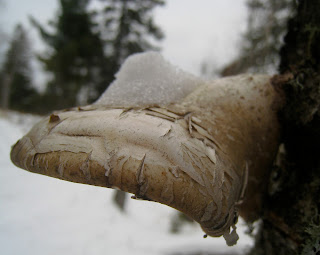 Birch Polypores are annuals (they refruit each year), but last for awhile on the sides of Birches before decaying and/or falling off.  The Tinder Conk is a perennial fruiting body and adds a new layer of pores each year.

While researching information for these two mushrooms I came across a few new (to me) mushroom websites that look interesting and very informative.  They are summarized below, at the end of the post.  I also rediscovered "Mycelium Running - How Mushrooms Can Help Save the World" by Paul Stamets.  It's full of information beyond the normal how to identify and can I eat it sort (which don't get me wrong, is also really interesting).
Websites: 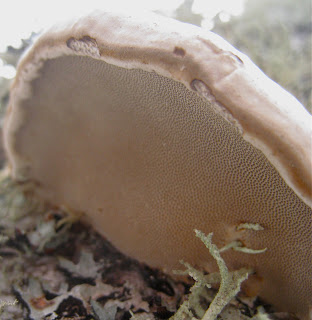 Medicinal Mushrooms
Detailed information about the medicinal properties of the Birch Polypore.
Woody Decay Fungus
More information about both mushrooms
Mushroom of the Month - F. fomentarius
Not new to me, but an excellent source of information.
Amadou Products
Mushroom hats from Romania! 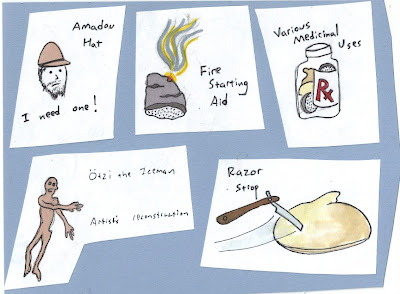