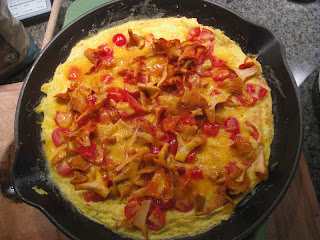 Last weekend I went on a short hike with my parents before breakfast.  We found a few chanterelles and decided to have them for breakfast, which ended up being a Chanterelle, Tomato, and Cheese Frittata. 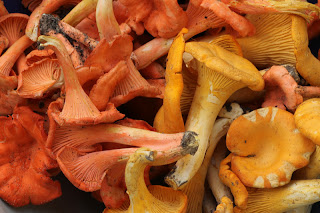 Here's the "recipe" from the cookbook in my head, with input from my parents and sister.  It served four.

10 eggs, scrambled
2 cups (or so) of chanterelles, coarsely chopped
2 cups (give or take) of cherry tomatoes, cut into quarters (ours were from our garden)
2 cups (minus what I snacked on) of medium cheddar cheese, grated
1-2 tablespoons of butter
Salt

First I sauteed the chanterelles with the butter and a tiny bit of salt for a few minutes in a cast iron skillet.  When done, I removed them and set them aside, leaving the butter in the pan.  Then I poured the scrambled eggs into the skillet.  I just let the eggs sit and cook, once or twice going around the edges of the pan with a spatula.  When they were about 90% cooked, with just some uncooked egg on top, I put in the chanterelles, tomatoes, and cheese on top.  Then the whole pan was put into the broiler for a minute or two, just enough to melt the cheese (oh yeah, preheat the oven so it's hot when you get to this part.  Remove from oven, cut like a pizza and serve while hot. 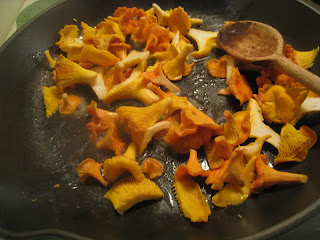