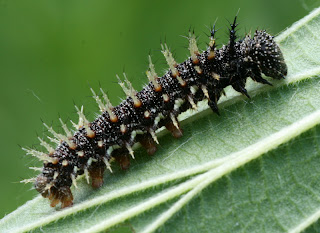 The title refers two butterflies, the Eastern Comma, Polygonia comma, and the Question Mark, Polygonia interrogationis, both in the family Nymphalidae, (Brushfoot butterflies).  The caterpillars of the two species are both spiny and of variable coloration, and have similar food preferences, making identification a little tricky. 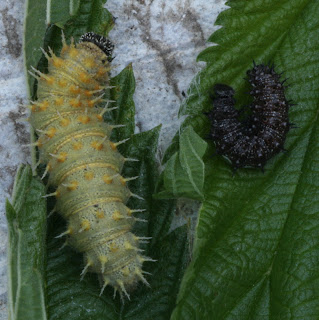 Key identification features for the two, paraphrased from Caterpillars of Eastern North America by David L. Wagner are as follows:

Eastern Comma: head with black and white spines.  Spines on the back of the body usually light colored with darker tips. 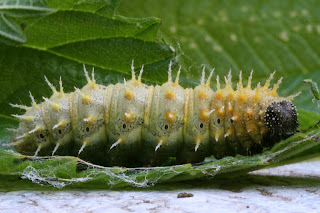 So I think these are E. Comma caterpillars.  The E. Comma will also make a shelter to feed in by folding a leaf over itself and sticking it together with silk.  From what I've read, the Question Marks  usually don't make shelters 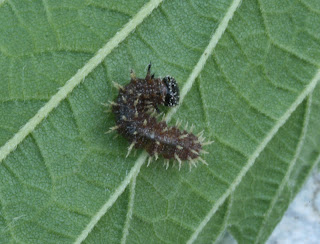 I've been finding these caterpillars on Stinging Nettles (Utrica dioica).  With the spines with the food, it seems like they might be unpleasant to touch, but the spines are harmless.  Maybe I've never really looked before, but it seems like there are a lot more than usual (it seemed like there were more of the Comma, and/or Question Mark butterflies in the spring too). 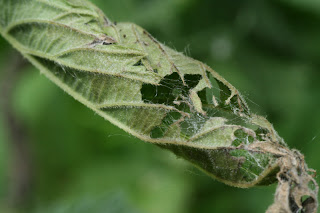 There is another caterpillar, of the Satyr Comma (Polygonia satyrus), that is also similar and feed on Stinging Nettle, but it usually features green-white stripes.  The butterflies of all three are also similar in appearance; orange with brownish markings above with irregular wing outlines.  All three sport whitish markings under their wings in the shapes of the punctuation marks that their names reference.
Posted by 11 at 5:41 AM