Deadly Mushrooms in the Snow 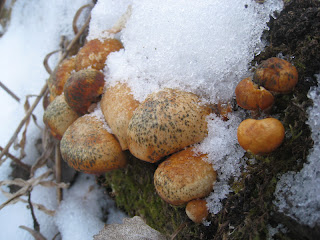 I found these mushrooms yesterday.  I assumed they were Flammulina velutipes, the Winter Mushroom, which is an orange mushroom that grows on wood during warm spells in the winter.  Previously, I thought it was the only mushroom that grew during the winter in Minnesota.  But after taking some pictures I realized they weren't F. velutipes. 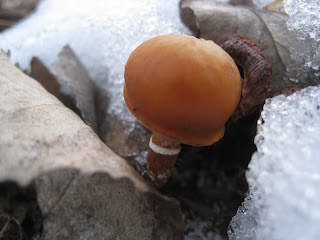 Notice the ring on the stem in the above picture.  F. velutipes does not have a ring; the mushrooms in these pictures are of Galerina marginata, the Deadly Galerina. 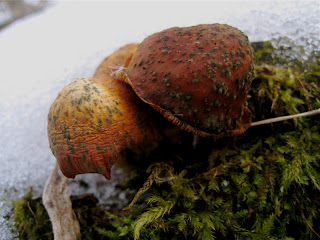 In a previous post about F. velutipes, I spent a little time wondering why it was (presumably) the only mushroom that grew during Minnesota's winter.  I now know that it is not the only mushroom.  I read the species account for G. marginata at Mushroom Expert and it definitely mentions that this mushroom can be found in winter months.  I wonder how many other mushrooms can be found sprouting in the snow? 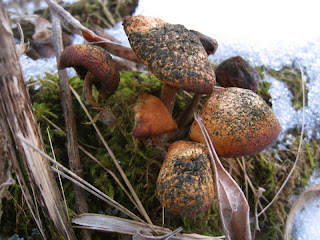 I think it's an odd coincidence that the two mushrooms I have found growing in the winter look so similar.  They both grow in cluster on wood and they are both smaller orange mushrooms.  Differences include: 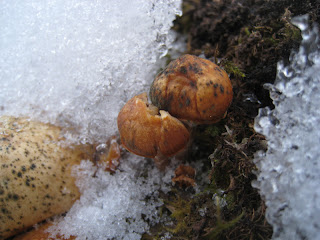 I almost passed these mushrooms up, because as much as I enjoy finding mushrooms, F. velutipes has been getting to be old news (ho hum, more F. velutipes I thought to myself).  But they looked so attractive in the snow and moss despite (or maybe because of) their aged appearance.  I almost missed the ring on the stem, which is a good reminder not to be too confident in your mushroom identification (and consumption).  I had looked at them for awhile, taking pictures, before I noticed it.

Anyone know of any other mushrooms that can be found in the winter in Minnesota?
Posted by 11 at 7:17 PM