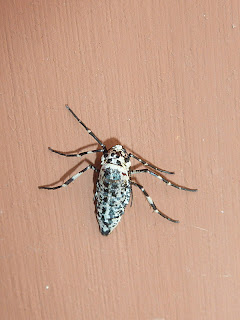 I've made a few posts recently about a three different species of moths in the Geometridae family that I've found on a garage at Westwood Hills Nature Center.  All three are cold weather moths, and all three have females that are wingless.  The two pictures in this post are of the wingless females (presumably of two different species), also found on the same garage.  I'm not really sure which of the three species each picture is of, but I'm pretty confident they are each photos of a wingless female of one of the three species. 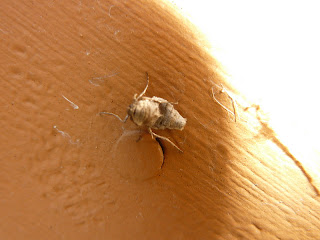 Earlier in the week, there were about 75 moths, between the three species, on the garage, which was the highest count this fall.  Their number rapidly declined over the week; one day this week I saw a Black-capped Chickadee flying to and from the garage, picking off resting moths and eating them.  Today there were about a dozen.

For a little more information and thoughts about these moths, visit three of my older posts: Bruce Spanworm Moth, Fall Cankerworm Moth, and Linden Looper Moth.
Posted by 11 at 6:39 PM