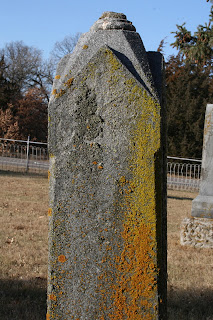 Yesterday I took a trip to Sherburne National Wildlife Refuge for some bird watching.  I wanted to take some back roads to get there to vary the scenery, and while looking on google maps I noticed that there was a cemetery named "Two Stones Cemetery" along the way.  It sort of sounded old and forgotten (don't know why), so I decided to stop along the way to see if any of the gravestones had lichens on them. 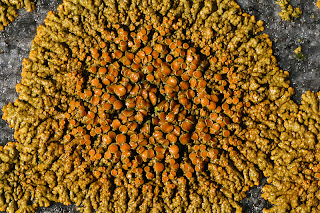 Some of the gravestones were quite old, with a few dating back to the late 1800s.  On these older gravestones I found plenty of lichens, including what I think are Sunburst Lichens (genus Xanthoria), pictured above and below. 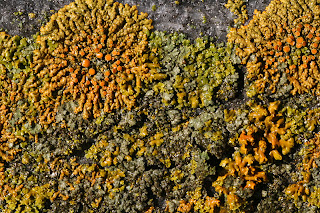 Most of the gravestones had similar assemblages of lichens (pictured in the first three photos here), but one of an obviously different type of rock had different lichens (last three pictures).  This gravestone looked to me to be made of marble, but I don't really know much about rocks and stone. 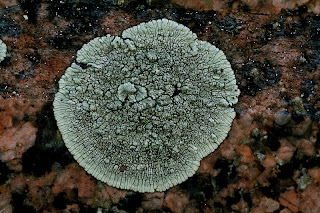 The lichen in the photo above had a subtle greenish-yellow hue about it.  My pictures, unfortunately, didn't capture the color I saw in the field.  Could this lichen be a Golden Moonglow Lichen (Dimelaena oreina)?  I didn't do any chemical test on any of the lichens I observed or bring any home for observation under a dissecting scope; after all, they were growing on gravestones, and it didn't seem appropriate to interfere (or deface).  I mentioned the name Golden Moonglow Lichen to my six year old daughter Naomi, and showed her a picture from the book "Lichens of North America".  She really liked the name and thought the picture was pretty, but quickly said "Let's do something else other than look at lichens" or such.  Later though, she said she thought some of her kindergarten classmates would be interested in lichens.  I considerately told her probably not; after all, I want her to have friends in school . . . 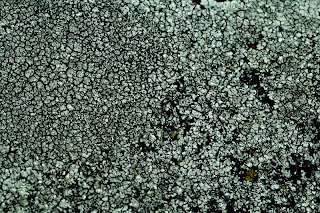 Above, more of the same lichen.  Below, more lichens on the same gravestone. 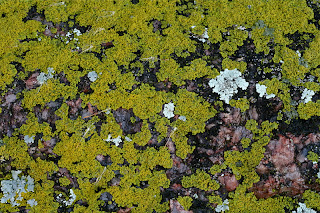 I didn't actually end up at the Two Stone Cemetery, these pictures are from the Orrock Cemetery.  According to the Sherburne History Center, the two cemeteries are very close together.  Down the road from Orrock Cemetery I notice a little sign for another cemetery.  The sign read Gronnerud Cemetery, along with mentioning a scout troop and the Sherburne County Historical Society.  I got out of the car and followed a barely noticeable trail into the scrubby woods until I came across two gravestones.  They were from the late 1800s, but were apparently tended for with a little bench and some flowers and were fenced in with a chain link fence, the fenced in area being about 5' x 5' (though a big tree had recently fallen on the fence).  I wondered if this was the Two Stone Cemetery?  Perhaps more importantly, it made me stop and contemplate the history of the two places I had just visited, in the sense of the stories of the people buried there, and of the natural history and how the two might possibly have intertwined.
Posted by 11 at 9:28 PM