Cicada Exoskeleton and Hen of the Woods 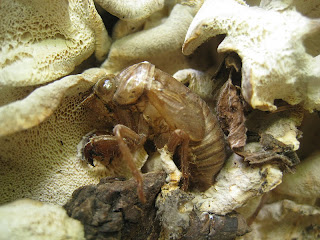 This cicada exoskeleton has been partially enveloped by the fruiting body of a Hen of the Woods (Grifola frondosa).  I thought it made an interesting picture, and interesting to see how some fungi just grow over and around whatever is in their way.

I'm not sure why I picked this specimen of G. frondulosa (I picked it in September), it was already quite dried up and not edible.  I suppose it was the dry fall we've had and the general lack of fungus; I needed something to satisfy my myco-curiosity.  I think in this case it paid off.

Speaking of dried fungus, curiosity and pay offs, I once tried drying some Giant Puffball slices in the oven to see if I could make "Puffball Chips" (my own uniformed idea, since I've later learned that Giant Puffballs become leathery with drying).  The odor of the puffballs drying in the oven was intense and filled the entire house quickly.  My wife, Sara, was pregnant with our second daughter Adele, and the smell made her sick.  The experiment was quickly ended and the windows were promptly opened.  Anyway, I brought this Hen of the Woods with the cicada exoskeleton home and kept it inside, but not for long; it had the same overpowering odor, and it quickly went outside until I got my camera out to take the above picture (after which it went into the compost bin).
Posted by 11 at 7:19 PM