This is the third species of moth to show up on the garage at Westwood Hills Nature Center late in the fall.  It's another cold weather specialist, like the Fall Cankerworm Moth and the Linden Looper Moth, both featured in previous posts.  And like those other two species of moth, the females of the Bruce Spanworm are flightless.  Presumably the reason for flightless females is a trade off; being able to fly in cold weather for an insect takes a lot of energy and producing eggs takes a lot of energy, so something had to give, so to speak. 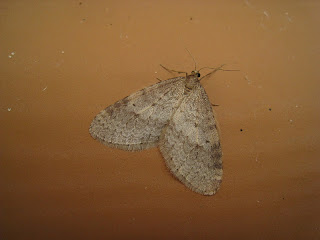 The other day we did a class for 3rd grade students at Westwood that focused on adaptations and how they relate to seasonal changes.  I told the group about these cold weather moths and the flightless females.  On a hike I brought the class I was with to see the moths.  I asked them to count how many moths there were on the garage.  They were so excited!  It might seem surprising that these kids would be so enthusiastic about a bunch of little brown moths, but I think they caught on to my genuine interest, and the fact they could conduct a little "scientific" survey.  In the bigger picture, I think it's interactions like these at a young age that foster positive attitudes towards the natural world and the environment later in life.  No big messages (not yet), mostly enthusiasm and observation with a little bit of guidance.