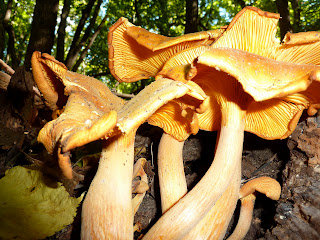 Jack O'Lanterns, Omphalotus illudens.  It's poisonous, it glows in the dark (under the right conditions it seems), and a potential anti-cancer drug has been developed from it.  It also smells quite good; I'm not sure how to describe it, maybe sweet and almond extract-like.  I carried one back, along with some other mushrooms, in my hat the other day.  My hat smelled like the Jack O'Lantern for much of the day (and made me think of spores germinating in my hair). 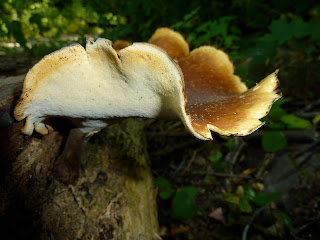 A Black-footed Polypore, Polyporus badius.  These mushrooms have been sprouting on the same log every summer at Westwood Hills Natuer Center for at least the last six years (when I first started getting into mushrooms and noticed them) 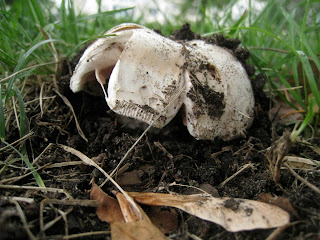 I think this is the Urban Agaricus, Agaricus bitorquis, which often sprouts in hard-packed soil (this one along a bike path), often basically underground.  Most late summers, I see this mushroom relatively often along boulevards and bike paths, but it seems to be relatively scarce this year, maybe because of the dry August we've had. 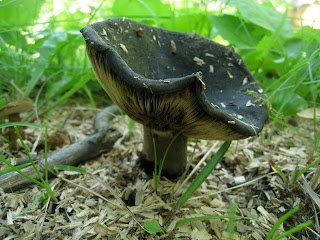 I found a few of these nice looking mushrooms growing in the middle of the somewhat mowed and maintained NPS St Croix Trail (it suffered tornado damage last year.  It had a brittle cap and gills and no latex, so I think it's a species of Russula.  For fun, I'll call it the Goth Russula for its black cap and the thirteen mosquitoes sucking blood from one of my feet when I stopped to photograph it (bad idea to wear sandals and no bug spray in the woods in August in Minnesota). 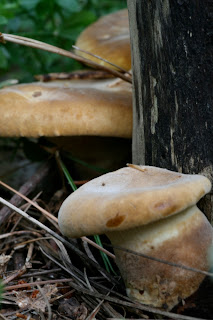 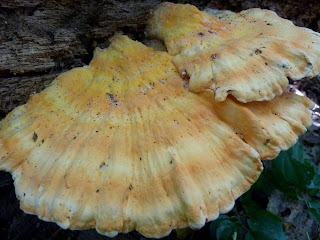 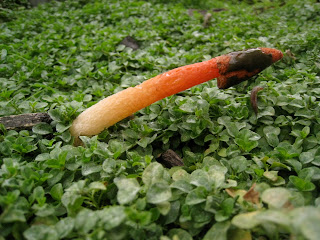 A stinkhorn, Mutinus sp, growing in our backyard. 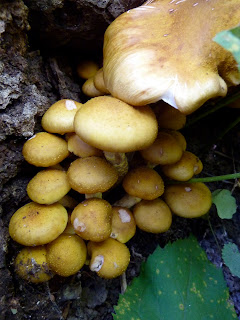 I'm pretty sure these are a species of Armillaria, probably A. mellea, but they seem to have more yellow "accessories" than is mentioned in most descriptions of this species.  In the picture below, notice the yellow fibers on the cap, the yellow-tinged ring, and the yellow fibrils on the stem.  A. mellea is usually described with these features, but usually of a darker color.

There's another species, A. sinapina that apparently features these same yellow accessories, but only in the Northeast, but not out West where they are colored differently (some shade of brown I assume).  And I'm in the Midwest, so is it yellow or something else?  Either way, I don't think the mushrooms in my photograph are A. sinapina because that species grows singly or in groups of two to three.  These mushrooms were in large clusters of twenty to thirty.

I spent awhile looking over Tom Volk's Key to North American Armillaria species, amongst other sources while trying to determine what species of Honey Mushroom I had found. 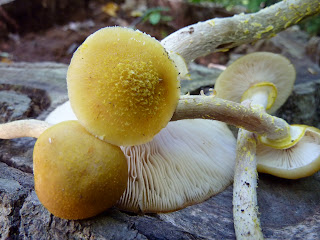