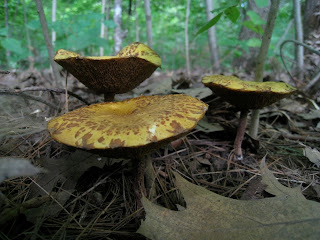 Chicken-fat Suillus, Suilus americanus.  It's a bolete that only grows under E. White Pine trees.  I brought a few home to try.  As described in most mushroom guides, the texture was slimy, but not unpleasantly so (what's a more appetizing word than slimy, maybe moist?), Sara described it as tangy and fatty.  Naomi described them as sour but good. 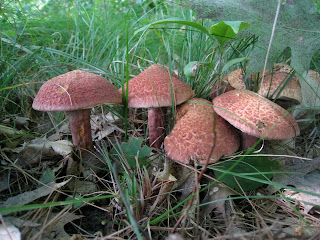 Another Suillus species, the Painted Suillus, S. pictus.  In my opinion, a very attractive mushroom.  I brought a few of these home to try too.  The texture was also slimy, I mean moist and fatty, but the taste I thought was fairly bland .  Sara liked them, and Naomi is eating a bowlful as I type this. 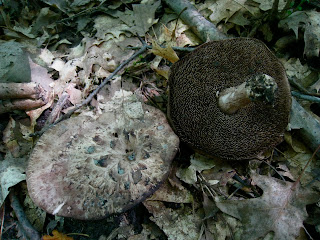 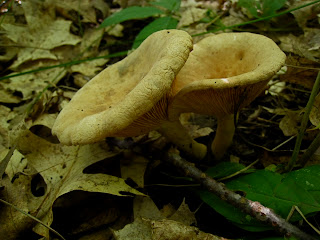 These mushrooms were growing in woods (white pines, oaks, maples), and had a yellowish to buff colored spore print.  I think they are a species of Clitocybe.

All but the Velvet-footed Pax were found at William O'Brian State Park, on a trail that ran right along the St Croix river.  We found many more mushrooms than pictured here.
Posted by 11 at 6:12 PM