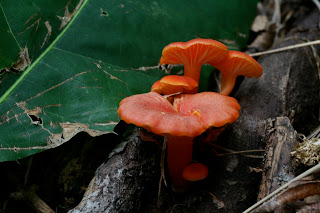 Waxy Caps (family Hygrophoraceae).  I found these and many more tiny, bright orange, red, and yellow Waxy Caps at Banning State Park (most of the pictures in this post were taken there or at St John's Arboretum). 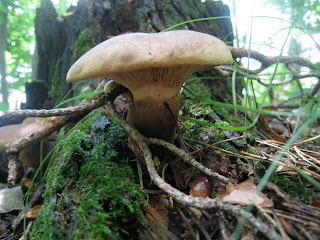 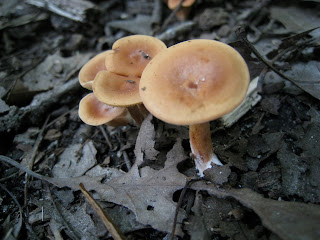 Lactarius subserifluus, a species of Milk Cap.  I've been finding this mushroom in just about every woods I've visited since early July.  They don't produce much latex, but sometimes have a distinct, though hard to describe odor (spicy, sweet, dirt smell?). 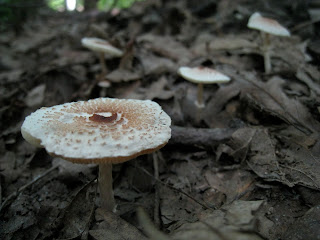 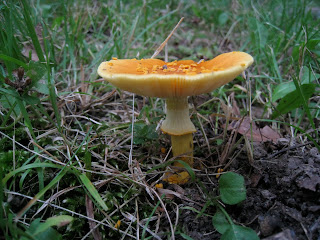 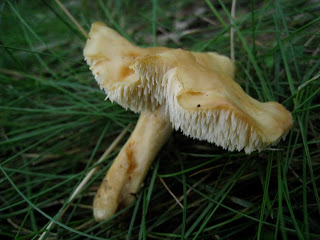 Hedgehog Mushroom, Hydnum redandum.  Notice the teeth under the cap instead of gills or pores.  It's supposed to be a good edible.  I think it's a good idea to collect or observe a mushroom a few times before sampling it, just to make sure, but this seems like an easy one to recognize. 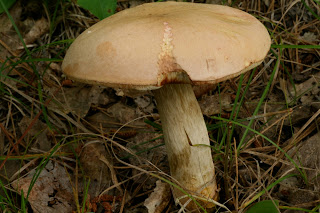 Chrome-footed Bolete, Leccinum chromapes (or Tylopilus chromapes), one of the handful of bolete species I've found recently.  Sort of dull at first glance, but quite beautiful on closer inspection.  I plan to post more pictures of this mushroom soon. 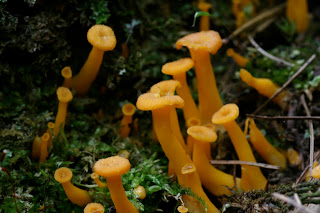 I really don't know what these minute yellow mushrooms are.  Could they be the fruiting body of one of the few lichen forming fungi that produce a mushroom fruiting body?  They were growing among lichens, as well as moss, rotten wood, and forest debris.  They resemble a species of lichenizing Omphalina.  I'll have to look more closely next time I come across these (if the mosquitoes don't carry me away like they tried to do when taking this picture). 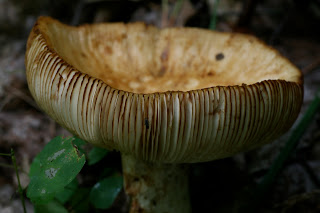 Russula laurocerasi or R. fragrontissima.  I found a lot of these at Banning SP and St. John's Arboretum, but most were well decayed.  They had an interesting sweet-almond to gross, rotten stuff odor to them.  The two are differentiated by microscopic features (if I've narrowed it down to the correct two Russulas). 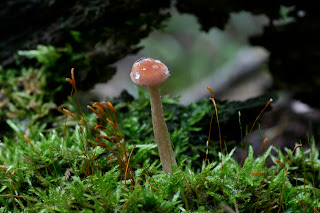 The above tiny mushroom looked so cool in the moss and framed by the arch of decayed wood.  I spent a lot of time trying to take a picture that captured what I saw. 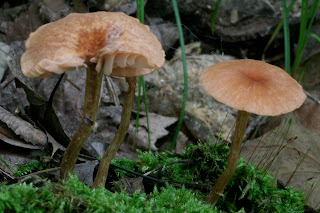 I think these mushrooms are more mature versions of the one pictured above.  They were all growing on mossy logs. At home, it produced a white spore print.  It dried up, but then revived after being soaked in water.  Both of these features make me think it's a Marasmius, along with its overall look, but it also resembled some pictures and descriptions of a related genus Gymnopus.  Ultimately, a microscope would probably be needed to get a decent ID.