We took a walk at Wolsfeld Woods SNA in June.  Adele found this piece of bark with Rosette Lichens (Physcia sp) on it.  My kids know I'm interested in lichens and like to point them out when they find them.  It's a little odd I'm sure.  If we're at a party or something and one of them exclaim "Daddy, I found a lichen!", I can almost hear the murmurs of plans to buy my poor children a Barbie doll or My Little Pony. 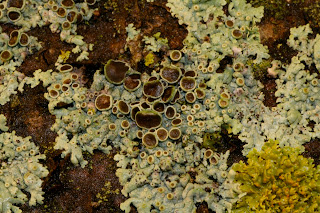 After some study I think the lichens in these pictures are either Hoary Rosette Lichens (P. aipolia), or Star Rosette Lichens (P. stellaris).  I'm undecided because my chemical tests (pretty essential to lichen ID) are homemade.  I'm leaning towards the Hoary Rosette Lichen because of the white maculae in the thallus (white spots under a dissecting scope) and the white pruinose of the apothecia (the dark brown disks; under a dissecting scope they have a white speckling or something).  Both lichens can show this feature, but the Hoary Rosette Lichen more so.  The crucial detail, I think, is whether the medulla (the inside of the lichen, which in this case is very thin and hard to see) turns yellow with the K chemical test.  I'm not sure, and I'm not sure of the reliability of the substance I used to perform the K test.  I used household lye, a suggested substitute in most lichen books for the K test, but did I mix it properly? 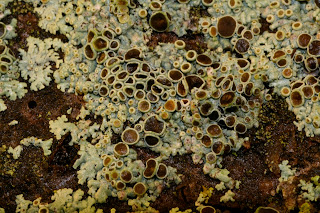 Whatever its identity; the lichen in question is still beautiful to look at, especially under a little magnification, and one of my kids found it for me.

And finally, lichens with the general appearance of the one pictured above are relatively common around the Twin Cities.  Maybe you can find one.
Posted by 11 at 8:21 PM