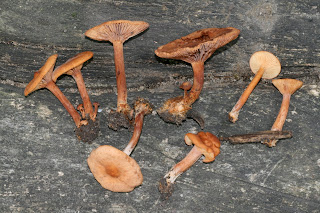 These mushrooms have been fairly common at Westwood Hills Nature Center the past couple of weeks.  I think they are a species of Milk Caps, Lactarius subserifluus.  Beyond it's overall appearance and size, I'm basing my id on the following features:
It's not a mushroom generally mentioned in field guides or mushroom websites (though there are similar species).  I found it at the Mushroom Expert site. 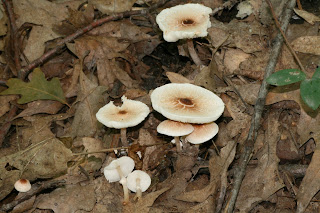 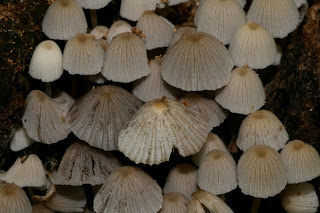 Fairy Bonnet mushrooms, Coprinellus disseminatus.  They were growing by the hundreds at the base of a partially rotten tree, pictured below. 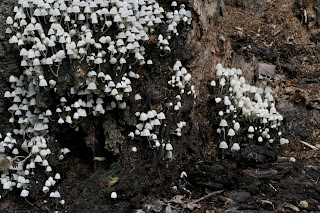 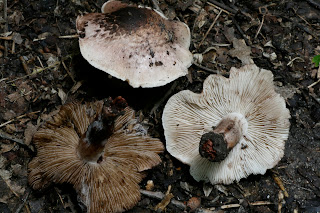 These mushrooms had a brown spore print, and were a little smelly (maybe paste-like).  I think a species of Inocybe.  They were growing on some bare compacted ground near a shed bordered by woods containing mostly Box Elder, Buckthorn, Elm, and closest, one Buckeye. 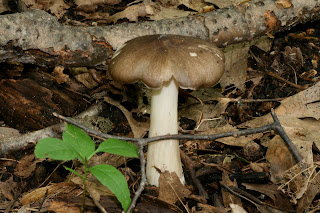 Megacollybia rodmani.  Growing on and near a rotten log, with a white spore print. 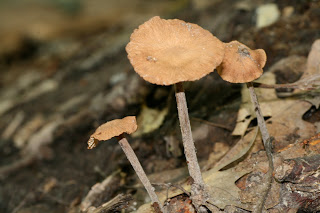 I don't know.  They were growing on a small, fallen branch and had a greyish, almost fuzzy stem.  It resembles the Fetid Marasmius, Micromphale foetidum, but didn't have a distinct odor, which is characteristic of the Fetid Marasmius.  But they were pretty dry when I found them, but still intact which is also feature often found in this group of mushrooms; maybe that's why they didn't have an odor.