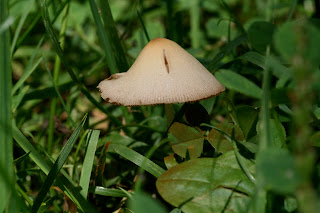 I found a number of these small mushrooms growing on a grassy trail at Afton State Park yesterday (where all of the following mushrooms were found).  I think it is a species of Conocybe based on its habitat, general appearance including rusty-brown gills, and fragility.  I collected one to do a spore print, but there was no trace of the mushroom once I had gotten home. 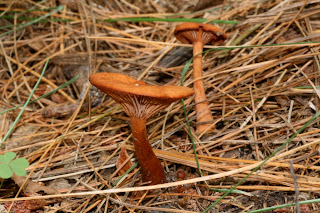 I brought a number of mushrooms home for spore prints, including the one pictured above.  None of the mushrooms I collected produced spore prints, which made identification harder, if not impossible; I have no idea what mushroom this is.  I found a number of them growing under some pine trees. 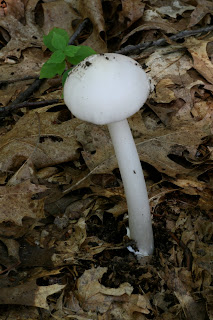 Perhaps a species of Amanita.  It had an indistinct to scaly cup (called a volva) at the base of the stem, a patch of tissue on the cap (which, along with the volva are the remains of the universal veil that envelopes a young Amanita.  If this is an Amanita I should add), and it had the overall appearance and stature of an Amanita.  Growing along side these mushrooms were ones with brown caps that looked remarkably similar, maybe a more mature specimen (pictured below). 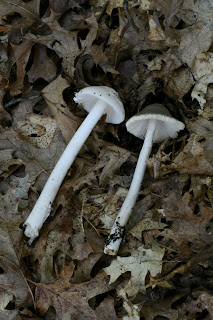 I brought both of these home for a spore print, but like I said before, no luck, maybe it's the hot weather.  The lack of a spore print, and the fact that I noted details only in my head (which were later forgotten) made ID with any certainty difficult.  Since I've started taking pictures of mushrooms this summer, I've gotten out of the habit of taking notes, which I need to do; the camera doesn't usually record minute details, and it certainly doesn't record textures or odors. 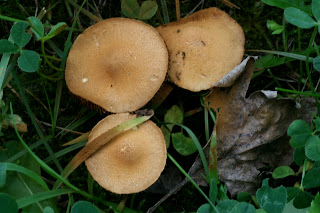 I'm going to be bold and say that the mushrooms pictured above are Inocybe caesariata.  Bold because first, they are LBMs, and second because the genus Inocybe may contain over 400 species.  But it matches very well a description in the "National Audubon Society Field Guide to Mushrooms", including white margins on the gills (observed at home).  Again, I didn't get a spore print at home, but the picture above provided me with one; notice the brown dust on the grey leaf and the blade of grass over the lowest mushroom.  Below is another picture of I. caesariata. 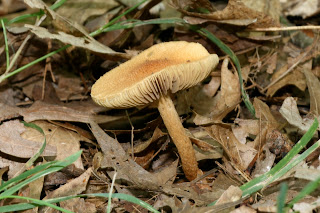 I found a lot of Russulas yesterday.  Because of their brittle flesh, they often end up like the ones in the picture below. 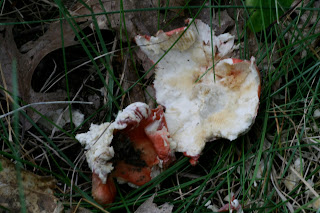 I also found a number of boletes.  Most of them were well eaten by bugs and slugs, or moldy.  But I found a couple of small, fresh ones like the one pictured below.  The picture doesn't do it justice, they were so pristine and their caps had such a velvety quality to them. 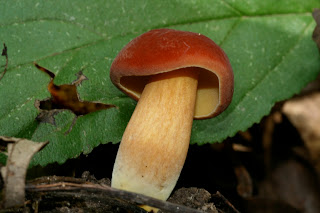 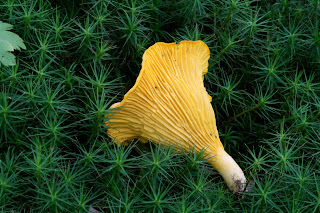 More chanterelles were found.  Many were chewed up by bugs, but I collected a few. 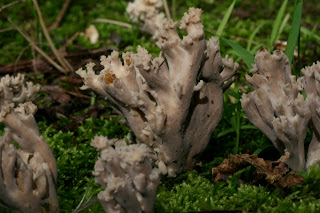 And finally, a coral fungus growing in moss.  I don't know much about coral fungi (less than other fungi that is), but they are an attractive bunch, and a number of them are edible, so I'd like to spend more time learning about them.  Me and this fungus were featured on KSTP channel 5 news yesterday; it was part of a story on the reopening of state parks after the prolonged government shutdown in Minnesota ended.
Posted by 11 at 7:09 PM