An impressive name for a such a small, inconspicuous plant.  At it's tallest it reaches about 2 feet, and it's flowers are under a quarter of an inch wide.  In the United States it's a native plant of eastern woodlands, but it's also found in Eurasia.  It's tiny white flowers have only two petals, though they are deeply notched and appear to have four petals if you don't look closely.  It's fairly uncommon for a flower to only have two petals; it's the only one in Minnesota, and probably the only one in the eastern US.  The flowers develop into little burs.

Despite it's common name, it's not actually in the Nightshade family (Solanaceae), which contains many famous and infamous plants (tomato, potato, belladonna, and tobacco to name a few).  It's a member of the Evening Primrose family(Onagraceae) which is a family of plants that in general are not very famous or infamous.

This plant was supposedly one used by the sorceress Circe of Greek mythology to perform magic.  Both the common name, Enchanter's Nightshade, and the genus name, Circaea, come from this association.  One thing Circe was known for was turning men into animals. 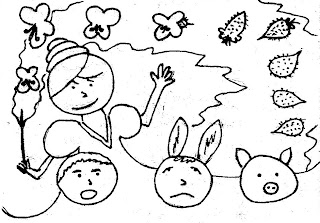