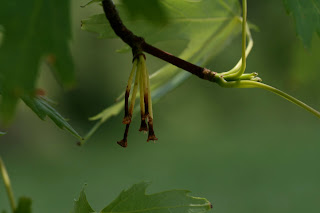 I've been following the flowers of Silver Maples (Acer saccharinum) since March.  Last weekend in my neighborhood, the Silver Maple seeds were spinning down and around in a strong wind.  I thought I might be able to take some cool pictures of a bunch of Silver Maple seeds flying around (with some good luck given my novice photography skills).  But by the time I got a chance to get my camera out, the wind had died down.  Later in the week I visited a Silver Maple that I have photographed a few times earlier in the year for this blog.  I found the bare stems that had once held the flowers and then seeds.  But something new was happening with this tree. 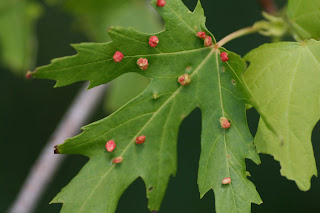 Many of the leaves were covered with small, reddish bumps.  The bumps are Maple Bladder Galls caused by the feeding of a small mite, Vasates quadripedes.  The mites overwinter under the bark of the Silver Maple, and then move to the new leaves in the spring and begin feeding, causing the galls to form.  The mites reproduce inside of the galls and the young mites move on to other new leaves through the summer to feed, moving to shelter under the bark as the summer ends to repeat the cycle.  They generally don't cause lasting damage to the tree, despite their often abundant presence on the leaves of a Silver Maple.  It would be interesting to open up one of the galls and look inside under "my" dissecting scope (generously on indefinite loan from my father-in-law Tom).  If I take the time to do it, you'll see the results of my observations on this blog.
Posted by 11 at 7:00 PM