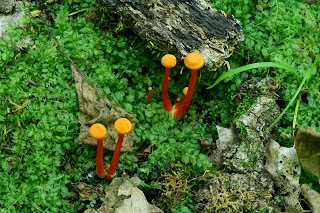 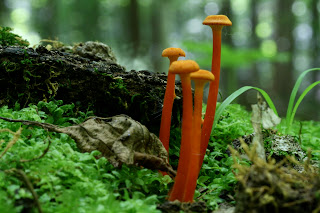 These first two pictures are of tiny Waxy Caps (Hygorcybe sp).  I found them at Wolsfeld Woods SNA, but almost missed them, they were so small.  I think they are really amazing. 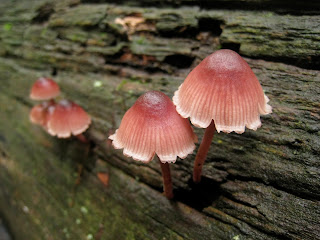 Bleeding Mycena, Mycena haematopus.  They exude a purplish juice when cut or crushed.  Not that I go around crushing mushrooms, but I did cut the stem of one to see, which also made the identification more certain. 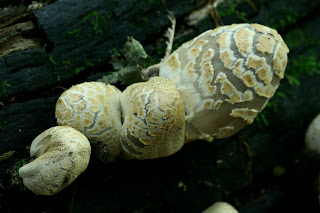 Inky Caps, or coprinoid mushrooms growing at Wolsfeld Woods SNA.  The most current name for this one, I think, is Coprinopsis variegata. 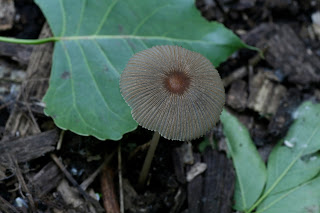 Mushrooms such as this one have been sprouting on a wood chipped trail at Westwood Hils Nature Center since May.  I think they are a species of Parasola, maybe P. auricoma, another coprinoid mushroom. 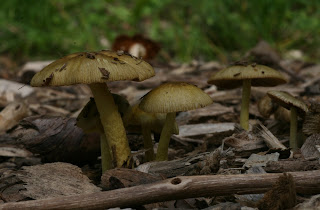 The previous two pictures are of Bolbitius vitellinus, the Yellow Bolbitius, or the Sunny Side Up mushroom.  I love the different common names given to mushrooms, but they vary greatly from one source to another, if given at all, and aren't much use for communicating the identity of a particular mushroom.  The little caps in the first picture were very slimy, the older ones in the second picture just sort of moist.  In the background you can see the rusty brown gills this mushrooms gets as it ages.  They were growing on a wood chipped trail at Silverwood Park. 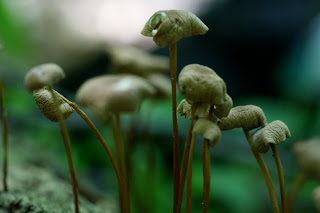 Probably a Marasmius sp.  Many species of Marasmius have wiry stems and caps shrivel up in dry weather.  Many will revive upon wetting.  I poured the contents of my water bottle on these to see if they would revive.  The only result is that I got quite thirsty later on. 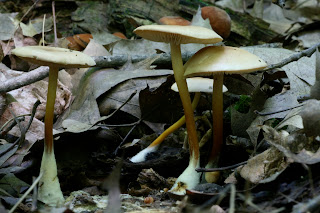 I brought one of these mushrooms home to do a spore print, but no luck.  Maybe it just needs more time.  I like the thick mycelium growing up the base of the stem. 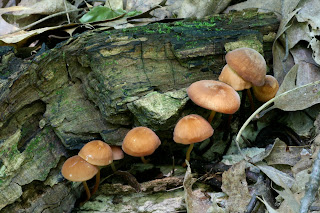 Growing right behind the preceding mushrooms were these.  Again I brought one home for a spore print, but nothing came of it.  They look like Mycenas.
Posted by 11 at 7:04 PM