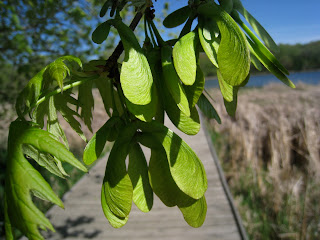 This is the same tree I featured in my last Silver Maple post.  The seeds have really grown a lot.  The last post was ten days ago, and the seeds had barely started to develop and there was still a lot about them that said maple flower.  I was surprised they had grown so much, given the mostly cool weather we've been having. 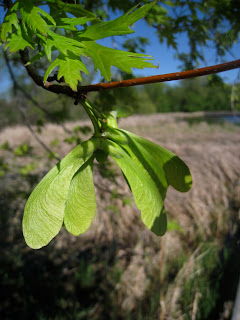 Maple seeds are edible.  You have to take off the winged seed coat; the actual seed is found at the rounded part at the base.  Many sources say you have to boil them to remove the bitter tannins.  They are best when still green.  I've tried them unboiled and found them to be not bad.  Not much of an endorsement I know, but our sheltered palates aren't used to the flavors (or lack of) found in most wild foods,  Maybe I'll try some in a salad with my kids this spring; there are certainly enough around (enough seeds, I have two kids).
Posted by 11 at 6:31 PM