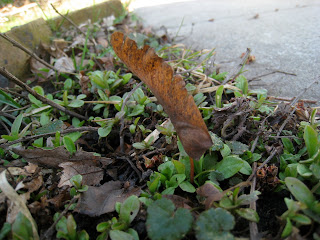 Maple seeds are sprouting all over the garden.  The one above hasn't managed to shed its seed yet. 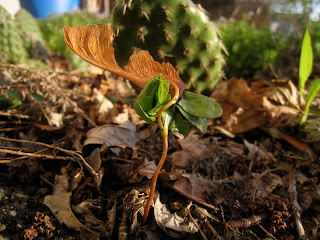 This one looks like it is also struggling with its seed.  I like this picture because it has the prickly pear cactus in the background (probably an unlikely combination outside of a garden).

I've assumed the the maples sprouting in our garden are Silver Maples (since we have a big one growing in our front yard).  But I actually paid attention to them today, instead of just pulling them up, and I think they are probably Norway Maples; the leaf-shape is wrong for a Silver Maple (unless the young leaves are shaped differently, which is possible).  There are Norway Maples growing on the boulevard, but where are the Silver Maple sprouts?  Maybe they sprout later in the year.  But I don't really remember pulling up little maple sprouts later in the year.  Below is the one maple sprout I didn't pull up (to watch and maybe eventually replace our old Silver Maple).  It looks like a Norway Maple. 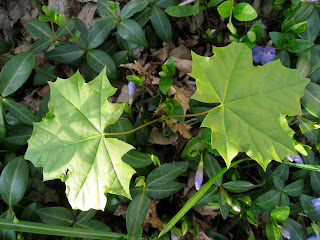 On Thursday I took a picture of Silver Maple leaves; they hadn't fully leafed out yet.  Today they look like respectable leaves (but look rather autumnal with the orange coloration). 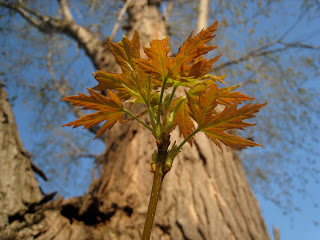