Some LBMs I found growing on a log along the Mississippi River at Crosby Farm Regional Park, Polyporus arcularis.  It is fairly distinctive for a polypore; it has large angular pores under the cap, and the stem is central, instead of off-center, lateral, or absent as in most polypores. 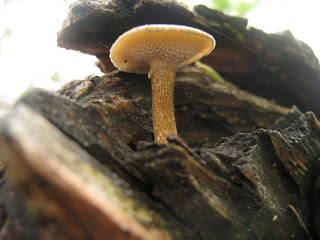 I also found the orange fungus pictured below on the same log.  I had walked by the same log in March and noticed the bright orange inside the hole in the tree, which really stood out, given that everything else was mostly white or brown.  I'm glad I stumbled across this log again, especially since my search for Prothonotary Warblers (presumably nesting at Crosby Farm) through all the mud and Wood Nettles was fruitless.  The same log also had a number of cup fungi growing along it's length, which may appear in a future post.  It would be interesting to return to this log again to see how this orange fungus progresses through the season, and to see what else sprouts up (and maybe see a Prothonotary Warbler). 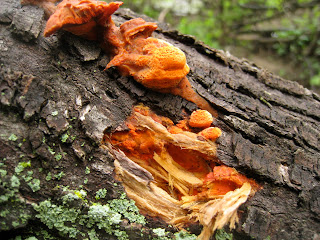