Lichens on a Glacial Erratic near Marsh Lake 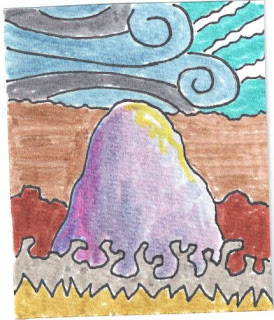 I took a birding trip to Salt Lake (Minnesota) on the South Dakota border with my good friend Kerry this weekend.  Our main goal was to watch shorebirds, but everything was really flooded, and the mudflats that attract the shorebird were underwater.  Plus it was really, really windy, which made everything in the spotting scope hard to see.  So we didn't see many shorebirds (at least not many different species; we did see a flock of 1,000+ Lesser Yellowlegs at one point which was really cool).

We birded some other areas, including Marsh Lake in the Lac Qui Parle Wildlife Management Area.  There were plenty of birds, hundreds of White Pelicans and gulls, but most were on the far shore of the lake.  There was a large boulder nearby on our side of the lake, a glacial erratic, a rock deposited thousands of years ago by one of the glaciers that had moved through the area.

We walked over to it.  I wanted to climb on top, hoping to get a better view, maybe of an hidden mudflat, teeming with shorebirds.  But no luck, it was a little too tall, steep, and smooth to climb on top.  But it was covered in lichens. 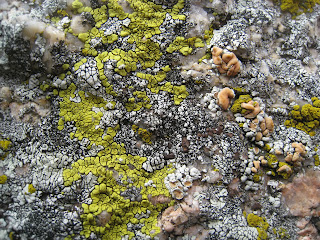 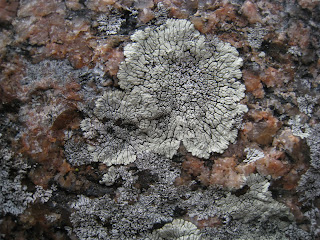 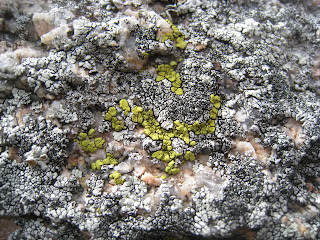 I spent a little time at home paging through books, hoping to identify some of these lichens.  But I didn't have a hand lens with me at the time, or chemicals to test for the presence of different lichens substances, and I didn't try to bring any home for further study; they belonged where they were. 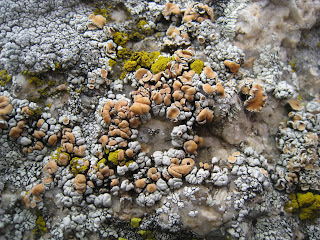 After some lucky browsing, I believe the squamulose lichens in the above picture are Rock-posy lichens (Rhizoplaca spp).  Squamulose lichens are somewhere between crustose, or crust-like and foliose, or leaf-like, in appearance.  I'm talking about the grayish blobs (thallus) with the pinkish blobs (apothecia, spore producing part).  They and their saxicolous (growing on rocks) companions made up some interesting and beautiful combinations. 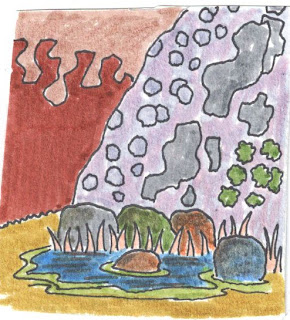 A closer look at the glacial erratic. 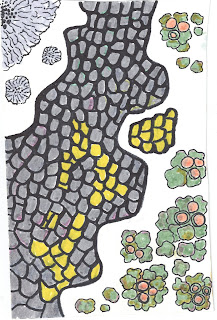