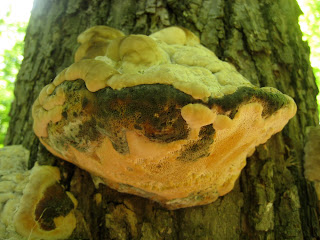 I took pictures of these conks in March.  Some conks are perennial and continue growing from season to season.  When I photographed them in March I intended to return periodically to see if there was any change. 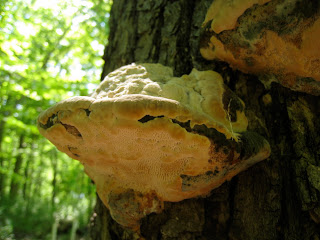 They were very white in March.  Not much happened until a few weeks ago when they started looking moldy (darker patches in current picture).  I kind of gave up on them, figuring they weren't going to grow if they were getting moldy.  But then today I noticed what looks like fresh fungal material (the off white stuff) growing over the older, darker fungus.  I didn't expect to see this, since it appeared that these wood rotting conks were themselves going rotten.  But then again, the conk is just the spore producing, or fruiting body of the fungus.  Most of this fungus is living inside the tree, breaking down and feeding on the wood.   For comparison, if a rose dies and falls off a rose bush, the rose bush continues living (It's not a perfect comparison, not even as close as apples and oranges, just for mental imagery purposes); when a conk or mushroom dies, the fungus body, or mycelium, keeps on living (inside the tree in this case).