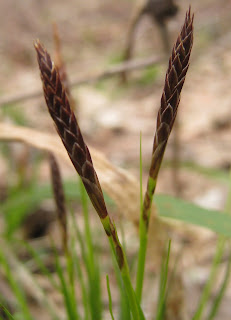 I saw these at Westwood one morning recently.  I've never noticed them before and was pleasantly surprised to find them.  They look like grass, but are actually sedges (family Cyperaceae).

Sedges may be the most overlooked plant in our area.  They look like grasses (family Gramineae), but there are a few important differences.  In the stalk, sedges have edges, while grasses are round.  Grass leaves have joints (not what you might be thinking), and sedge leaves don't.  And there are some more technical differences between a sedge flower and a grass flower (they both have flowers and so are in the angiosperm phylum, even if their flowers don't look like "flowers"). 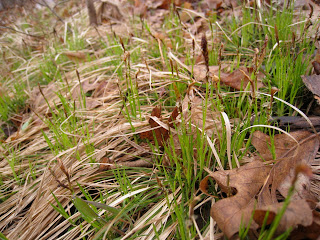 I had a job in college studying the germination rate of the seeds of five different sedge species under different conditions.  It was a great job, and a big influence of on what I'm interested in today.  Much of the time was spent in the lab, but there were also seed collecting forays in the sphagnum bogs at the Cedar Creek Ecosystem Science Reserve that really opened my eyes.  But I've largely ignored sedges since then.

After some reading, I discovered that sedges make up one of the largest families of plants in Minnesota.  I consulted the "New Britton and Brown Illustrated Flora of the Northeastern United States and Adjacent Canada" (a classic in plant id and an awesome title) by Henry A Gleason, and found that the sedge family (Cyperaceae) contains more species in our area (the area covered by Britton and Brown) than any other plant family except the grasses (Gramineae), and the composites (sunflowers, daisies, dandelions, family Compostiteae or Asteraceae).  They even beat families that are big world-wide like the legumes (Fabaceae) and the orchids (Orchidaceae).  My survey was quite informal, just counting the number of pages devoted to each family, but each species is given about the same amount of page space.  And quite interesting, since most of us have probably never met a sedge.

The sedges in my pictures belong to the genus Carex (the Sedges of the sedge family).  Carex contains more species than any other genus in our area (the area covered by Britton and Brown)!  Sedges aren't really important to people by most measures (unlike the similar grasses), but something must be going on in this group of plants. 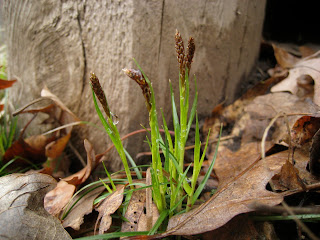 I believe the sedges in my pictures are of Carex pensylvanica.  Carex is a tough genus to sort out, but I'm pretty sure my id is correct based on it's overall appearance, early flowering, and I know it grows at Westwood.

It's not a great time of the year to notice sedges, but later in the summer, see if you can find some (sedges have edges).
Posted by 11 at 7:25 PM