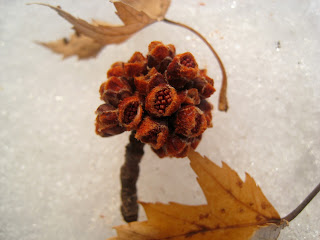 Here's a picture of a Silver Maple (Acer saccharinum) flower that was on the ground at Islands of Peace Regional Park.  Silver Maples flower before they leaf out, and they flower very early.  You may be surprised to learn the Silver Maples flower, since the flowers are so small and they emerge so early in the year (that's snow in the background).  But Silver Maples are Angiosperms, or flowering plants.  Most plants are Angiosperms.  There are plants that don't flower, such as mosses, ferns, and conifers (not a complete list).  But most plants that are noticeable, or that you call a plant or a tree, do flower, even if you don't notice the flower.  I notice Silver Maple Flowers for a number of reasons.  First, they are one of the first spots of color in Minnesota's white and brown winter to spring transition.  Second, because we have a big Silver Maple in our front yard, and Silver Maples are brittle trees that drop a lot of their flowers (and twigs and branches), I find a lot of flowers on the ground.  Third, they produce a lot of flowers that fall on our roof, that then roll down to clog up our gutters.

Flowers can be either female (pisitillate), male (staminate), or both (bisexual).  Bisexual flowers are bisexual plants.  But plants that have separate female and male flowers are either:


Except for the exceptions, like the Silver Maple, and many others (plants are like that).  Silver Maples are:


I've never been able to keep the terms monoecious and dioecious straight.  Though I can seem to remember the meaning of more esoteric terms like cyme, strigose, or farinaceous (spell check liked that sentance).  Anyway . . .

. . . I hope you get a chance to enjoy some Silver Maple flowers, especially if spring has been delayed as it has been in Minnesota.  And I plan to take some more pictures of Silver Maple flowers in the next few weeks, to see how they grow and develop, and to admire some early spring color.
Posted by 11 at 8:38 PM