These two funguses are members of the fungal phylum Ascomycota.  There are many member of the Ascomycota that are well known and common in our lives.  Morels and truffles are some famous edible ones.  Apple scab, ergot, and powdery mildews are diseases on plants important to us.  Penicillium is an Ascomycota.  And many of the lichen forming fungi are in this group.  But most, in general,  are not well known to us.

All Ascomycota share a common feature called an ascus.  An ascus is the microscopic structure that produces spores.  An ascus is describes as sac-like and the spores are produces internally This is in contrast to the Basidiomycota, i.e. gilled mushrooms, where the spores are produces externally on a club-like structure called the basidia (as for the other fungal phyla I don't know, or what they are, and can't say I've ever met one in person).  On a Scarlet Cup, the asci are on the upper, bright red surface of the fungus.  As far as I know, asci are found on the whole surface of a Black Knot.

Scarlet Cup Sacroscypha dudleyi and S. austriaca grows on buried or fallen hardwood sticks and branches.  It is a saprobe (decomposer).  I notice it in Minnesota in late March and early April, around the time we tap maple trees at Westwood.  You need a microscope to distinguish between the two species.

Black Knot, Apiosporina morbusa, is a disease of cherry and plum trees (Prunus spp).  It can be fatal (to the tree).  My friend and fellow naturalist, Amy identified it for me.  I searched the internet using phrases like "black lump an twig", but didn't find a match.  I've notice it a lot the past few weeks.  It's harder to see when there are leaves on the trees.

I knew the Scarlet Cup was an Ascomycota before writing this, and I suspected Black Knot was too (call it fungal intuition).  Initially I thought about how cool it was that two very different looking organsims were in the same taxonomic group (I was thinking about other cool stuff too, like . . .).  But then I realized that the taxonomic level of phylum is pretty broad.  As a comparison, humans (us) are in the phylum Chordata, but so are birds, reptiles, fish, and anything else with a backbone (and so are lancelets and trunicates, whatever they are).  And even though many of us have been compared to the above groups (I believe a high school economics teacher called me a trunicate after I skipped his class for a few months), the differences are probably greater than the similarities. 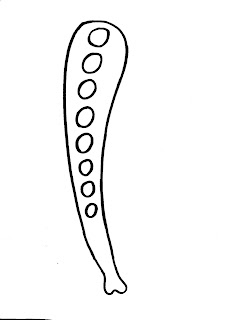