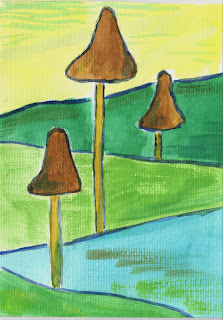 The phrase "Little Brown Mushroom" doesn't mean much other than the obvious.  It doesn't tell you much about the mushroom, nothing about it's habitat preferences or it's ecological role, it doesn't give you any taxonomic information, or whether it's edible or poisonous.  It sort of means I've seen a mushroom that's small, drab, and I don't want to take the time to learn much more about it.  However, there seems to be an abundance of LBMs in the world.  Why so many mushrooms that are little and brown?  Someone looking at the question from an evolutionary perspective might wonder what advantages there are to being a small, brown, and overlooked mushroom.  Maybe it's just that you can more easily avoid being eaten by (small, brown and hungry) fungivores.  From a more spiritual perspective, one might wonder why the creator (etc) has a fondness for the small and brown.  Whatever the reason, LBMs are everywhere, and yes they are important, quietly and inconspicuously doing the work of decomposing, parasitizing, or mycorrhizalling the world.

I think they are great, partly for the reason that they are everywhere and not many people look at them, partly because it's a fun challenge to try to ID them (I know how to have a good time), and partly because some them are really interesting, even if you don't care about mushrooms.  LBMs have a lot going against them as far as popularity contests go:

But below I present four LBMs that I think could interest even the most Big-admiring, Colorful-loving , Mushroom-hating individual around (maybe) 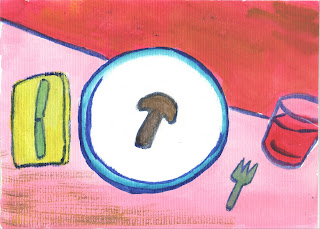 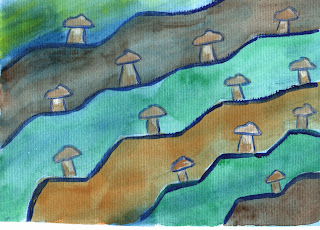 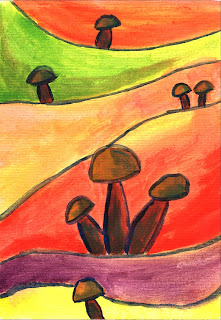 It grows every summer around the swing set in our backyard.  We call it the "Lawn Mower's Mushroom", the common name given in the National Audubon Society's Field Guide to Mushrooms by Gary Lincoff.  It's small.  It's ubiquitous.  It's sort of a friend.  And it has a role to play.

As you may have noticed, there's no picture of it; it's because you have probably never noticed or heard of this mushroom.

By the way, the mushrooms in these pictures have been painted with a complete disregard towards accuracy and detail.  They are the based on the product of an afternoon drawing with my five year old daughter Naomi and were done entirely for the sake of fun and imagination. 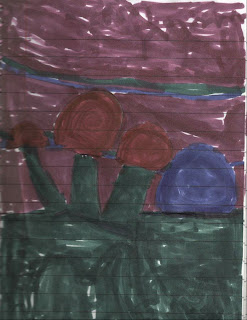